Can not mount usb mass storage device on TX2 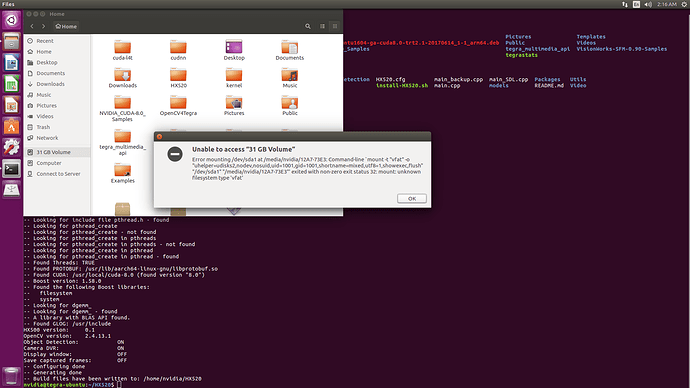 Thanks and Best Regards,
Vu Nguyen

It is extremely likely that it is just an issue of not having the VFAT file system module. What do you see from:

FYI, if you do add this, and expect to be mounting CDs or DVDs, you might also add ISO9660 at the same time. These can be built as a module.

However, I can locate the module.

Lets try to load it with insmod or with modprobe:

you might also add ISO9660 at the same time. These can be built as a module.

Not all features are in the format of a module…lsmod does not work for any integrated feature or driver. “/proc/config.gz” lists all CONFIGs and can differentiate between module (“=m”) and integrated (“=y”). This is why I prefer to use config.gz instead of lsmod unless I already know I have the module.

I believe you will find VFAT (a Windows file system type) is not enabled by default (nor ISO9660 of a CDROM/DVD). As an alternative to building a module you could just format as ext4 instead of VFAT.

The advantage of building a feature as a module (if supported) is that you don’t have to update the kernel itself…you simply copy the module in place and run “sudo depmod -a” (then probably reboot, but you could use the “insmod” command listed above by “@Andrey1984”).

By default the return of the command is “m”, as it seems to me.

An interesting point…it is possible for vfat.ko to be there even if the kernel build originally did not produce that file. For example, I sometimes add modules instead of building a whole new kernel…and the kernel’s original config.gz only reflects what it was originally built with. It seems one would have to check both the module directory “/lib/modules/$(uname -r)/” and “/proc/config.gz” to know for sure what is available.

In terms of the original question though it seems that the simplest solution is to build the vfat.ko module…if this module existed on the original system it would have loaded on attempt to mount unless there were some other odd error.

Due to vfat and ntfs file system are only selected as module built so there are two ways to fix this issue: