We want to expand Trusty available memory space in Jetson AGX Xavier Device, there were some discussions in another topic here.

We show more details below based on the overall process, where we were not able to expand Trusty memory space.

You can find detailed and recorded process below, and our tests to validate memory expansion.

Could let us know if we’ve most probably missed something important along the process?

We also wonder how configuration changes are applied to the newly flashed TOS?

Thanks for your support !

After applying the suggested previously discussed modifications, we’ve followed your instructions by 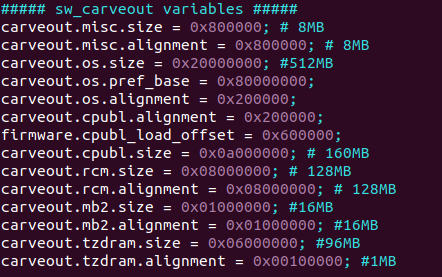 In order to check the Trusty TA memory expansion, we implemented two TAs, ECHO-SRV and SMALL-ECHO-SRV.
Both them simply collect the big float array data from Client Application (and store them, manipulate them or not) and send them back to CA.
Since the message port size is limited to 4KB, we need to send multiple rounds of data from CA to TA.

The only difference between two TAs is the maximal size of float array that could be stored in the TA.
For ECHO-SRV, the length of wanted array is 64000, for SMALL-ECHO-SRV, it is 20480.

Echoes data from a CA.

We implement one CA named echo-srv-app which could connect the TIPC channel with either ECHO-SRV or SMALL-ECHO-SRV.

It is able to send a big float array with different sizes to TA, we could compare the different results from two TAs.

The CA splits the big float array to small payloads that are able to be sent to TA.

You can find attached TAs and CA source code.

For your information, the SMALL-ECHO-SRV TA works well for a float array of smaller size (20480).

For clarification, we’ve recorded the full process below.

In addition, we can find below timed details on the several steps.

The recording is available here.

Before the recording, the target device(Jetson AGX Xavier) is in Force Recovery Mode, and both TAs have been compiled successfully.
USB Type C and USB Micro B of target device are connected with host computer.

5:11 - 5:50 : recompile CA and execute it by sending testing data to ECHO-SRV. Note that,
the testing array sent has lenght of only 2048, and Trusy OS crashed after receiving the first payload.

Question about memory allocation among different applications in Trusty
JerryChang July 25, 2022, 1:57am #3

could you please review the TA stack size allocation,
for example,

could you please enlarge the stack size and try again,
thanks

Thanks, it helps! While I found that enlarging the heap size by TRUSTY_APP_CONFIG_MIN_HEAP_SIZE helps the program to store larger data allocated, but TRUSTY_APP_CONFIG_KEY_MIN_STACK_SIZE does not. It makes sense because ‘malloced’ data is stored in heap.

Follow up the process, there is a new question:
I enlarged TRUSTY_APP_CONFIG_MIN_HEAP_SIZE to 200*MIN_HEAP_SIZE which is 200*4*4KB = 3.2MB, it works well(or even 300 times MIN_HEAP_SIZE). While I keep enlarging it, the Trusty(secure-os) may be unable to flashed, all CPUs cannot be allocated properly.
What is the limitation for TRUSTY HEAP SIZE ? Is it defined also by carveout.tzdram.size?

it’s TOS carveout region to define the TZDRAM, which is a software carveout. this is defined by carveout.tzdram.size,

If I understand correctly, we only should keep the sum of allocated HEAP_SIZE and STACK_SIZE smaller that carveout.tzdram.size and re-size each of them as we wish, is that correct?

If so, that would be the solution I would take. Thanks !

yes, please have implementation with that, you may open a new discussion thread for further supports.