Could it be possible to have all Xforms in folder by default?

When I try to make some room for my new objects and characters in this Factory Environment, I struggle with moving thousads of Xforms to my new Scope called “factory”. It would takes hours to move them all there.

I would like to have one main folder under Root that have all stuff coming from Unreal Engine. Then I could have the stage clear for my new assets. Now I have to work like this: 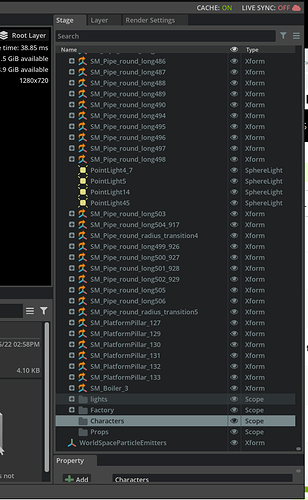 Hi @pekka.varis! I will bring this to the devs attention, in the meantime, @mati-nvidia suggested that you could try this:

He could potentially send from UE to a LayerA.usd and reference LayerA.usd in MainStage.usd. That way Live Sync could still be sending data to LayerA, but in his MainStage in Create, it would be all tucked under a single Xform.