I am just starting to look into using CUDA graphs.

So far I have not seen text specifically on how a CUDA graph is traversed or on how to build a graph with dynamic traversal.

Looking at this graph: 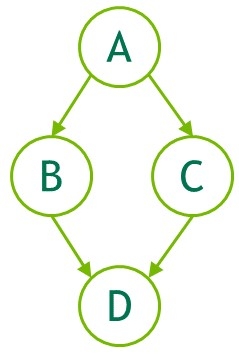 Kernel A does some work and, based on the results, I want the graph to execute Kernel B or Kernel C. In either case, there is a “finalize” kernel D.

One type of scenario - packet of data comes in (say 60MB every 200ms). My code does a dev-to-dev memcopy of the data into the graph’s shared memory. I then kick-off the graph execution.

Thank you for any help.
Juan

launch both B and C. Have B and C check whether they should run or not, and if not needed just exit.

For example, kernel A sets a device boolean variable (called var) true or false. The code in B does:

The code in C does:

I did think of this, but I was hoping not to have that logic within the kernels but keep it in the encapsulating graph logic or at least in some code at the end of the kernel that could tell the graph which node to run next.

It seems to me, however, that every node in the graph will be executed; if there was an additional node between B and D (say B2), then after directly exiting B (because if var is false), then B2 would be ran as well…