I’m using xrandr with two different DPI screens, I’ve seen the problem on both screens, but it only seems to happen on one at any given login.

After reinstalling the nvidia driver the problem occurs on both kernels, both 5.6.6 and 5.6.4 (maybe I was wrong before about 5.6.4). But it only occurs in the randr scaled 1920x1200 monitor and only where the background isn’t drawn correctly. See attached image. 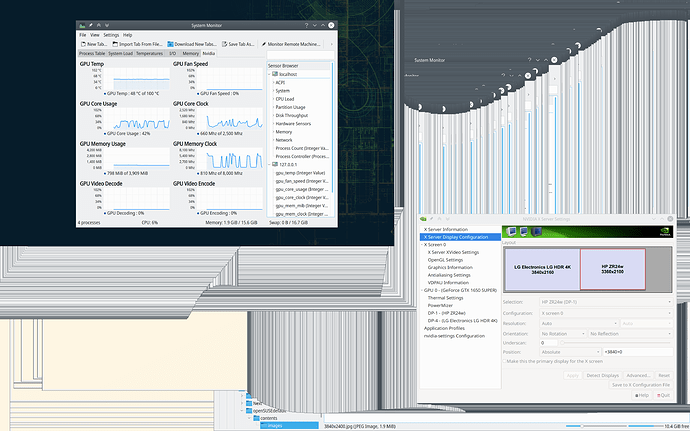 It might be a startup timing issue. I have xrandr run as part of desktop login:

If I rerun this command after login by changing --scale to 2x2 and the run again with the desired 1.75x1.75, then the background image fills the DP-4 display and the problem no longer occurs.

Perhaps I need to build in a sleep to the xrandr as a work-around.

OK - I’m back to where I was before the problem. Somewhere along the way KDE decided to turn off the compositor. I re-enabled it and the problem no longer occurs.

On login, the background still doesn’t draw and fill the scaled screen unless I run two xrandr’s for --scale 2x2 followed by --scale 1.75x1.75, but I’m not going run two of them just to fix that.

So it’s not a fix, but my normal configuration won’t show the error. It would be good if compositor/non-compositor scaling issues could be made more solid.