This particular issue has been covered in https://devtalk.nvidia.com/default/topic/595378/linux/ubuntu-13-10-nvidia-prime-suspend-resume-bug-touchpad-bug/2/?offset=22#4225154 before, however, that thread appears to be about two independent issues (as I do not experience the other one mentioned there). Thus, I decided to collect all available information about this, add my own findings, and make a thread specific to this behaviour.
This bug has also been covered in https://bugs.launchpad.net/ubuntu/+source/nvidia-prime/+bug/1220426, which lists other setups people have encountered it with.

The issue is that Xorg, when using the proprietary nvidia drivers, freezes irregularly, and can only be brought back by switching virtual terminals and then switching back. (e.g. Ctrl+Alt+F1 -> Ctrl+Alt+F7)

While it sounds like an issue specific to the touchpad, it’s not. It does not happen when using the Intel drivers (and with that the Intel GPU in the system). Furthermore, it does not appear to have been encountered in systems without an nvidia GPU.

The following laptop is the one I’m using, which does have the issue described in this thread:
ASUS UX32LN-R4021H

Other laptop models with similar configuration reportedly show the same issue; they are mentioned in the launchpad bug report comments.

The following graph shows that the issue does not occur while the computer is not being touched. The data collected comes from a period of seven days. The freezes were logged by grepping the Xorg log file for the above mentioned messages that are logged after it occurs, and ignoring the first two hits which are from boot-up. 325 freezes have been logged over the span of roughly 171 hours. This data has then been thrown in the general direction of a physics graduate, which resulted in a pretty graph.
Note the gaps on the timescale. This is when I’m asleep, and thus don’t touch the device, which appears to result in no freezes. 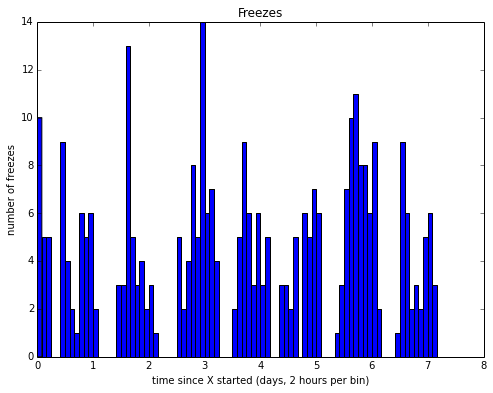 Please let me know if I can provide any additional information to help fix this bug as soon as possible.

I see the same behavior, even though I don’t have a pretty graph to show it :), and so do at least 154 other people running various flavors of Ubuntu (https://bugs.launchpad.net/ubuntu/+source/nvidia-prime/+bug/1220426). This bug has been present for over a year now, and is generating some serious bad karma for nvidia hardware among us Linux folks. Does anyone at nvidia care?

I think i noticed this aswell on my UX32VD Laptop!

Not sure if this is it but since I upgraded to latest drivers and KDE5 desktop ive had 2-3 freezes that i had to manually reboot with. Switching TTY’s did help the first time but the second time it happend i just had a black tty. And capslock was not responding.

This bug has been largely noticed, me I’m suffering from it. It involved the XServer compositor too. I reported it here: https://bugs.launchpad.net/ubuntu/+source/xorg/+bug/1393412. Please say if it affects you too.

The fix was reviewed, so at this point it’s just waiting for Keith Packard to merge it into the upstream codebase. At that point I’ll nominate it for backporting to the xserver 1.16 branch.

As Aaron Plattner said, I applied the patch and it works really fine. I’ve prepared a quick answer here: http://askubuntu.com/a/550603/349383 if you can’t wait until the update is released.

I’ve been using the patch for over a month on ArchLinux now by applying it myself, and it has been working wonderfully for me. Thanks to everyone who helped fix this!

Hello, where can I find the mentioned patch? I’m having the same issue on my N551JW NVIDIA 960m laptop.

xorg-server-1.17 and newer all have it applied.

No issues settting it up with the following grub cmdline before installing the driver:

I can run 3D with both Intel and NVIDIA cards.

Hope it helps someone.