HELP: Can't connect to my jetson nano via win 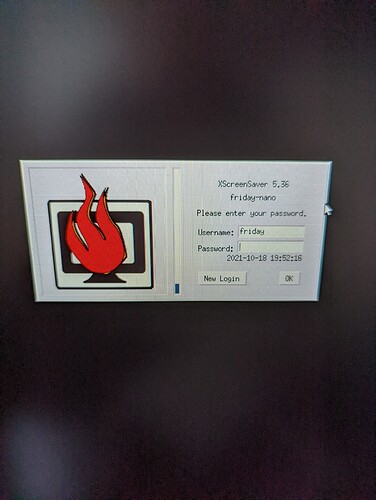 Hi,
We would suggest connect to host PC in Linux OS(Ubuntu 18.04 or 20.04). It may not work properly when connecting to PC in Windows OS.

I am curious to see the XScreenSaver running on Windows…is this WSL2 on Windows? Regardless, if Windows did not accept the USB network device and thus have an IP address assigned, then it won’t be able to communicate. I agree that Linux is more likely to behave well, but if from Windows you can ping the IP address (“ping 192.168.55.1”), then you have the basics. If it is really already talking to 192.168.55.1, but complaining of fingerprint, then it means ssh just needs you to ok its first contact for that name/address combination (not sure how to do that from Windows).

@DaneLLL tank you for the quick replay.

I was going through the getting started tutorial to connect my jetson to the PC so I would not even know how to do Linux… I worked with PLC’s and Arduinos before but I am not a programmer.

Can you advise on things to try when connecting jetson nano 2g to the windows PC?

FYI, the screenshot posted is from jetson nano since I a was not sure if what I typed in for the name “friday” was the right thing to use…

@linuxdev thanks for the reply!!

I am a noob and just getting started with Jetson. I don’t think I can work with Linux yet.

Do you have any suggestions on what I can try using Windows?

FYI, the screenshot posted is from jetson nano since I was not sure if what I typed in the win was the right (name, etc…)

Some background might be useful to you (not necessarily needed here, but you’ll find it useful in the future, don’t read this as a solution)…

The graphical environment in Linux is actually a separate program on top of the running operating system. Linux boots up in stages, and one stage is for text entry only (“multi-user.target” in the program controlling this), another is graphical (“graphical.target”). With Windows you would typically be married to graphical with no ability to “partially but normally boot” and have text only (which is useful when updating graphics or debugging graphics since you can do so on Linux without rebooting the system…you can reboot just graphics).

For a long time the program providing graphics is the X11 protocol “X server”. The look and feel are a separate program, the desktop manager. So one can completely change the GUI environment login feel without actually needing a new X server. Nowadays there has been development of Vulkan, which will likely one day replace X, but is now often used basically as a plug-in to X.

X has an interesting ability you won’t find in Windows: It works by seeing “events” (such as a mouse click or movement), and then the server interprets that to display it. The reason it matters is that using ssh means you can forward the events to your local computer, and have it run those events. You can’t forward to Windows unless you’ve set up an X server with some sort of Linux emulation, e.g., WSL2, but if this were Linux, then with no monitor on the Jetson, you could connect like this (assuming name is “ubuntu” and IP is 192.168.55.1):
ssh -Y ubuntu@192.168.55.1

Then, if you open a GUI application, e.g., gimp (which is a great graphical artist tool), the Jetson would be running Gimp, but the graphical display would magically appear on the local Linux X server. You could run several such applications from several Linux systems and have them bring up display on your single host computer as if they were all running there.

If you don’t have an X server to forward to, then you’d need to run the app on the Jetson’s local display. Or you could install virtual desktop software. X with ssh forwarding forwards events, whereas a virtual desktop runs everything on the Jetson and a program basically copies the desktop to another computer, and you’d need that separate client, but it would also become independent of operating systems so that Windows could have the Linux desktop, or Mac could, and it would be much easier than normal remote work (setting up a virtual desktop server though is more involved than simply forwarding through ssh).

The whole point of going through that is that if you only need text-based command line it is really simple to do with ssh, but if you need a graphical tool, then you have multiple options and you might ask based on your specific case/situation the best way to work via a remote computer.

Going back to the actual problem, ssh will work with Windows if you have the network route. However, Windows (and Linux and most every operating system) has the possibility that it won’t accept the USB network device with the address of 192.168.55.1. It is a simple security thing that you might need to somehow tell Windows that it is ok to use that device and to set up that network even if everything is otherwise 100% correct.

In Linux it is easy to see a log of what happens when you plug in the USB to see why the network is or is not working. Not sure on Windows, but there will be some Windows equivalent to “route” (maybe “route /all”? Not sure on Windows, but it will be “route /something” to see current route), and also “ipconfig /all” to see what the network setup is currently at. You will need to find out if your system was assigned IP address 192.168.55.100 (which can talk to 192.168.55.1), and if it is there, that you have a route to it. If not, then the hard part is figuring out why Windows is not allowing it. Probably it is somewhere in network setup or firewall, but I don’t know.

On the other hand, you don’t have to use the USB networking if the Jetson is also connected to the same router. On the Jetson you could run command “ifconfig eth0” and find the wired ethernet address (or “iwconfig” if it is wifi), and name that instead of 192.168.55.1). If there is no direct ethernet connection on the Jetson, then it needs the Windows computer over USB to accept the network setup and to allow forwarding of the Jetson’s network requests to access the internet.

Also, a “fingerprint” from the original message tends to say networking was up and accepted, but that ssh has never been told that this connection is legitimate, and so it is rejecting it until you say the connection is authentic. Not sure how to do that from Windows, but probably it depends on your ssh program and not the Jetson.