The Jetson Nano has the ttyTHS1 and ttyTHS2 for RS-485

I tried to transmit message from THS1 to THS2, but the messages only showed 15 words

What is the reason for this?

And is it normal for RS-485 function? 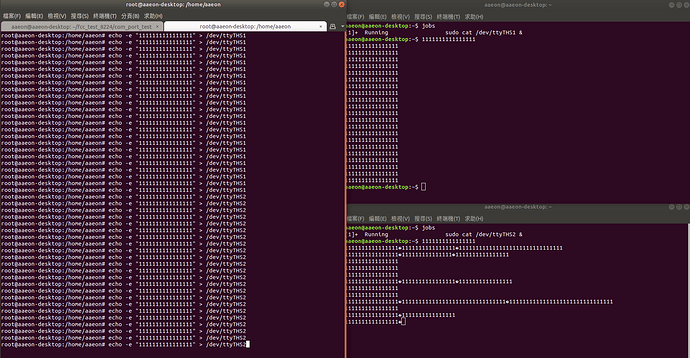 I have found the similar issue for this

We are seeing some differences in the communication error rates between the ttyTHS1 serial port nano, and the ttyTHS2 on the eMMC nano. Are there any signification differences between the 2 ports that we should be aware of? Specifically, when we communicate with ttyTHS1 on either an SD or eMMC nano, we can run at 921600 baud, sending 2048 byte messages - no problem! When we send from one nano (ttyTHS1) to an eMMC nano ttyTHS2, we’re seeing errors if we go above 57600 baud, 200 byte messages…

After I set the baud rate to 57600(my origin setting is 115200), the garbled characters disappear

Is there any possible baud in 115200 and there’s no garbled characters?

and, use the commands to have getty service running in the background manually.
$ sudo /sbin/getty -a ubuntu -L 115200 ttyTHS<port> &

I used the command to check the service is using or not, but there’s no process using this service
$ sudo ps aux | grep nvgetty

I have another question

Is Jetson Nano serial port support the speed up to 115200?

But I can’t set 115200 baud and transmit message successfully

I found the route cause in the dts

Thanks for your great help