Hi，
That I showed in the compiling the kernel times wrong, unable to find “drivers/video/prototypes/Kconfig”。
But I have no problem with make under TX and Xavier. 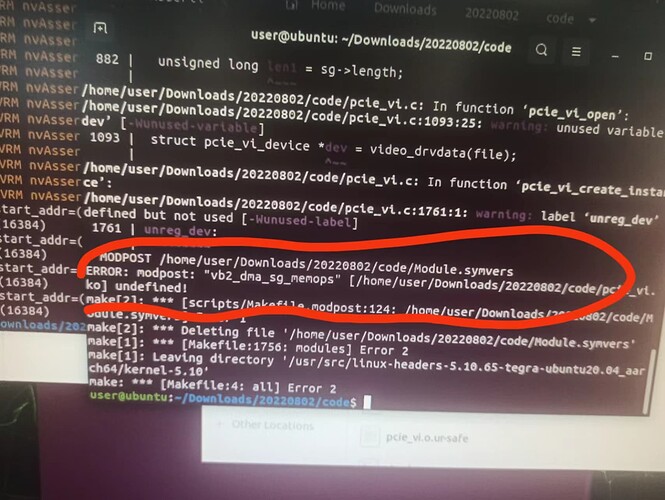 I would suggest to build the kernel from Host PC.

ShaneCCC, why are you discouraging a native build of the Linux kernel?

This is really troubling to me.

I tend to build natively, at least on the higher end Jetsons. The documentation though is for cross compile, and that is what is tested. Part of that is that the specific compiler version is known in the cross compile. I don’t think there is any recommendation against native compile so much as it is that when something does not work it is best to start with a known environment (including the specific compiler).

I think this would be a hassle.
Should I use Xavier’s kernel on Orin?

I see this tutorial is similar to cross compilation, I can use the Internet on ORIN, can I compile the kernel directly on ORIN?

Sorry, we don’t maintain building the kernel on Jetson device can’t give promise it hit any problem.

Keep in mind that there is a new full release JetPack 5.x (L4T R34.x) coming out in the next couple of days. The Orin ships with the developer preview, and this is Ubuntu 20.04, whereas the previous JetPack 4.x (L4T R32.x) releases on the Xavier are Ubuntu 18.04. The compiler versions may differ. Aside from this I’ve not had any issue with native compile of kernels directly on Jetsons if you get the right source and right config, but on older releases (long ago) had some specific compiler releases needed.

I have had issues with the Orin’s 5.x kernel builds (regardless of native or cross compile), but this was for developer preview, and I am thinking the upcoming full release will be far less of an issue. If you are building a cross compile, then it isn’t actually all that difficult since the compiler and other packages are exactly that: Available as packages, so you don’t have to work with unexpected software.