I connected monitor to DP port on dev kit.

When I cloned L4T Driver Package (BSP) from web and flashed it by:

Everything is OK. Monitor works and asks user name, password and other initial parameters.

Next step is compiling kernel from sources:

After coping all files I flash the images:

While booting, there is Warning Test key is used. Afteg it, monitor goes to power save mode. 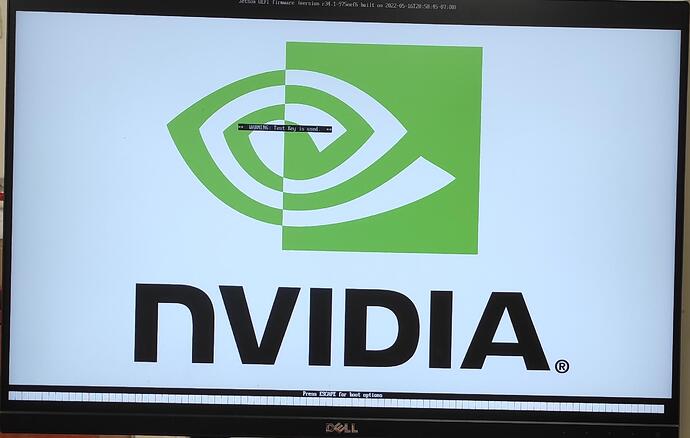 Similar issue i found inside this topic:

Could you please help!

I see your uart is still booting into kernel, so is this still under operation? Are you able to login the uart console?

Yes, UART console (via USB type C) is active and I can use it.
But DP monitor without activity.

Are those two files also built out from your source?

I compiled sources, obtained by

After compilation, there are no files nvidia.ko and nvidia-modeset.ko.
What is location of sources for these *.ko files?

What is solution?
How to get missed *.ko modules from your sources?

Modules are searched for at:
/lib/modules/$(uname -r)/kernel
(if this changes, but you did not install modules to the new location, then modules will appear to be missing)

If you look at “/lib/modules/$(uname -r)/kernel”, then you will find subdirectories match subdirectories of the actual kernel source. If you were to correctly set up kernel module configuration and build modules, then a module would appear in the kernel source tree where it’s source is located. As a contrived example, USB HID content is in the source at “drivers/hid/”, and any compiled module would also be in “drivers/hid/” (many “*.ko” files would be found here after module build). As a result, when installed, those files would be copied to the running system at:
/lib/modules/$(uname -r)/kernel/drivers/hid/*.ko

I would expect the two NVIDIA drivers to still be present if “uname -r” did not change. If this did change, then I would expect they’d need install to that new location. Even if they did not change, if the kernel itself had some new detail which makes the old modules incompatible, then those modules would fail to load (which is different than the files missing).

If you set the modules install location to an empty/blank temporary location, then “make modules_install” will copy the result content there and separate out the source. I’ll recommend trying it to explore what files are put in place there. If you simply run “make modules_install” without first setting up for a temp location, then it will directly install to what it thinks the running system uses. I do not recommend this latter install location on a Jetson since it does not give you a chance to see if it is correct.

An example for modules going to an alternate location, run as a regular user:

(then examine all that is in “${HOME}/build/modules”)

There are actually other things to do in addition to this, but that is the gist of seeing how and where modules are built and installed.

linuxdev, thank you for this information and such expanded answer.
But you says about loading these modules into the Kernel.
In my case I don’t have two modules (nvidia.ko and nvidia-modeset.ko) after compilation of sources, which provided by Nvidia.

WayneWWW, I still need answer, how to compile missed modules from your sources…

For loading these modules I had to update dependencies:

After it, desktop version of Ubuntu is starting successfully.

I have the same problem as you

I didn’t compile these *.ko modules, because Nvidia didn’t provide sources for it.
These modules appears after running apply_binaries.sh script.

Sorry that the source is in the tarball. Source sync does not download it.