Rendering in a definite range

I would love to have your suggestion. 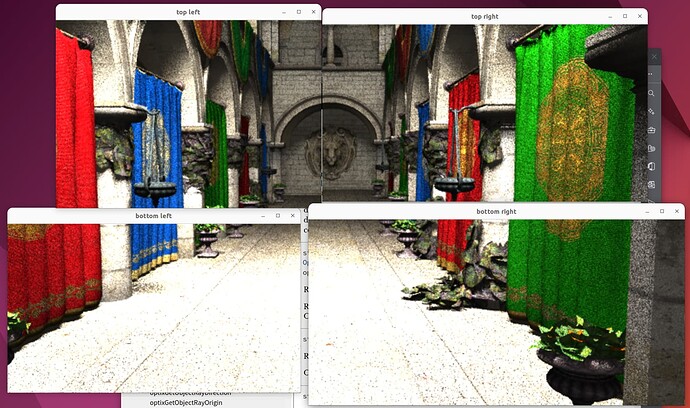 Instead of rendering the full scene at once, I want to render few portion of the scene separately (e.g., four portions).

To get the terminology right, if that is using multiple devices, all of them would need the whole scene geometry data to be able to implement, for example, reflections, global illumination and shadows correctly.
Not being able to access the whole scene geometry on each individual device would limit the rendering methodology to local shading algorithms only.

So what you describe is tiled rendering of a full viewport with some number of fixed tiles (here four). For that you would simply change the ray generation program implementing the camera projection to use pixel offsets for the four different sub-viewports and launch with the smaller number of launch indices, here a quarter of the full viewport size. Then you would get four quarter-sized images in this case.

Means rendering resolution representing the full image is different than the launch dimensions. The view-frustum calculation resulting in the primary ray origin and direction is exactly the same for all of the devices, just the mapping of launch index to the effective pixel coordinate on the full viewport is different and needs the respective tile offsets in pixels per device (or some other method like a viewport tile index if the pixel offset can be calculated from that at runtime) to be different inside your OptiX launch parameters per device.

Your case would be a lot simpler, but would result in less equally distributed workloads, e.g. when one of the sub-viewports contains objects or materials which are much more expensive to render than the other, it would limit the resulting performance to that device. That regularly happens in outdoor scenes with sky and ground.

I might have an easier solution, but for that I just need to render only in a finite range, e.g., starting point (40,60) and end point (400,600). The start and end points are arbitrary, that could be any pixel inside the given buffer size. Resizing the launchParams.frame.size.x/y in optixLaunch, I could limit the upper portion. But I could not define the particular starting point, each time it is starting from the (0,0) location. Also tried to run aoptixLaunch inside a loop.

I may be asked a very dumb question. I am thinking something like this figure: 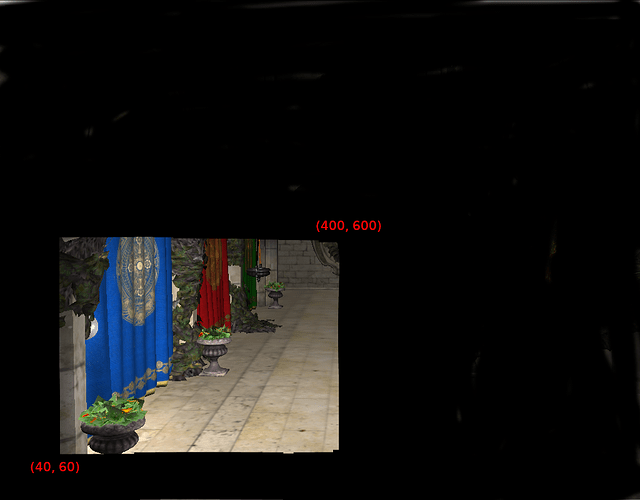 Are you’re saying your sub-viewport is always rendering the lower-left part of the full image?
Then you’re not calculating the pixel coordinate according to your viewport offset correctly which defines the primary ray.

Now you just need to calculate the effective pixel coordinates to map from launch index [0, 0] to your sub-viewport’s lower left start corner pixel coordinate [40, 60] which is simply an addition.

As said before, that would need to happen before calculating the primary rays inside your ray generation program.

For example look at this pseudo pinhole camera implementation:

Note that some of the “make” functions are not defined by CUDA headers. I’m using my own vector types helper header which contains them:
https://github.com/NVIDIA/OptiX_Apps/blob/master/apps/nvlink_shared/shaders/vector_math.h