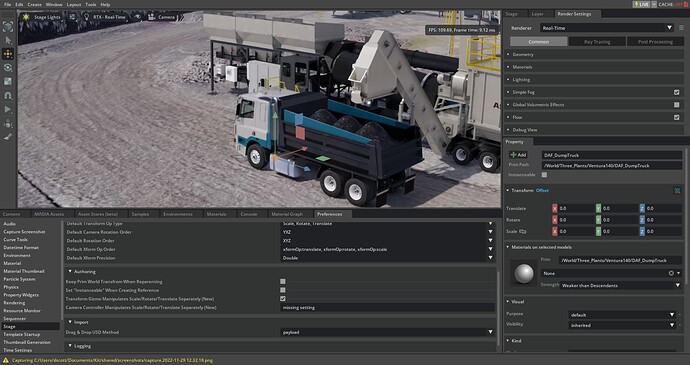 For some unknown reason, object selection outlines are not being drawn when selecting objects on the stage. Only the xform manipulator is being displayed, as shown in the above screenshot where the dump truck is selected, but has no outline.

The stage does have a nested hierarchy of objects: A parent xform with several USD children payloads. A couple of the payloads have child lights, and one has another child USD payload object. NONE of these items show that they are selected when they are selected in the right panel Stage tab tree.

Any idea what option/pref I must have inadvertently unticked? Yes, I’ve unticked/reticked the Selection option in the “eyeball” menu, to no effect.

Hello @DeanScott! Try checking these settings in your viewport menu: 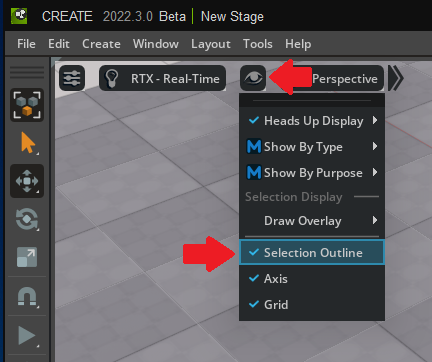 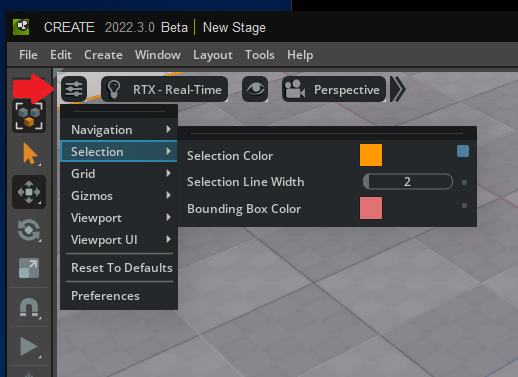 Let me know if this helps!

You must have missed… “Yes, I’ve unticked/reticked the Selection [Outline] option in the “eyeball” menu, to no effect.” and “In the “Slider” options dropdown menu, Selection > Size and Color are default.”

Hmm, ok. What GPU / GPU Driver are you currently using? And silly question, but I need to ask, have you tried closing Create and reopening it?

If you would like, I could have the devs take a look at your scene file to see if they can try to troubleshoot this? You can email it to me here: omniversecommunity@nvidia-omniverse.atlassian.net

Selection outlines HAVE displayed in the past, so I KNOW they work on this card, driver version, and system.

Update: It appears that the addition of an Omniverse Kit Perspective “layer” to the scene kills the display of selection outlines and any Overlay options.

I stumbled upon this by deleting all the models and lighting in the problem scene, creating a default Torus, and saving the scene as USDA. The code below was at the end of the file and listed in the Layer tree as “Omniverse_Kit_Persp” with a white outlined triangle icon. This layer/node could not be deleted or removed from the tree. I could not find any right-click menu options to create/add this layer/node in Create’s UI.

It do not know when, where, or how this layer/node was created/added to the problem scene, but when I deleted the above code, saved the scene as a new filename, and opened it in Create, outlines (and any other per object Overlay options) were displayed.

To test this further, I created a new default scene (which, obviously displayed selection outlines after adding a Torus), saved the scene as USDA, opened the file in Notepad, pasted in the code above, saved, and loaded the scene into Create, and the torus ceased displaying outlines, etc.

It appears the Omniverse_Kit_Persp layer was added when, apparently, the properties of the camera were edited or changed, because the Camera (in the Stage tab) has a child “OmniverseKitViewportCameraMesh” item with a transform icon, but a blank Type and no properties. A “Camera Model” transform is the child of this layer, but no mesh. I do not recall when I did such, or how this untyped layer came to be.

I’ll do a test and delete this camera and create a new one and see if the scene still works in Create XR using Steam, Steam VR, and Virtual Desktop with our Meta Quest 2 HMD.

The OmniverseKitPersp layer did not delete when the camera was deleted. It just changed its parent to World. The newly re-added camera, without having OmniverseKitPersp (OKP) as a child, functions just the same as before. However, DOF now renders, whereas that option also ceased to operate at the same time selection outlines did as well, so apparently I somehow changed the OKP to be the child of the camera. Weird.