I am using Omniverse code where I created a scene with fires. I need a thermal camera in order to detect the fire areas but I don’t know how to set it up. Could you help me please?

Thank you in advance!

Hi @margaux.bout37. Are you using Flow? You could map the temperature to the fire color. Would that do what you’re looking for?

Hi @mati-nvidia, thank you for your answer.

Let me give you a bit more context. I’m generating a scene with at the foreground a village (houses, roads, humans, etc.) and at the background a forest with a fire (at first only smoke and then real fire). To generate smoke and fire, I’m indeed using flow.

I need to generate this scene as a thermal camera or IR camera. Here is on example of what I want to reproduce for the forest background part. 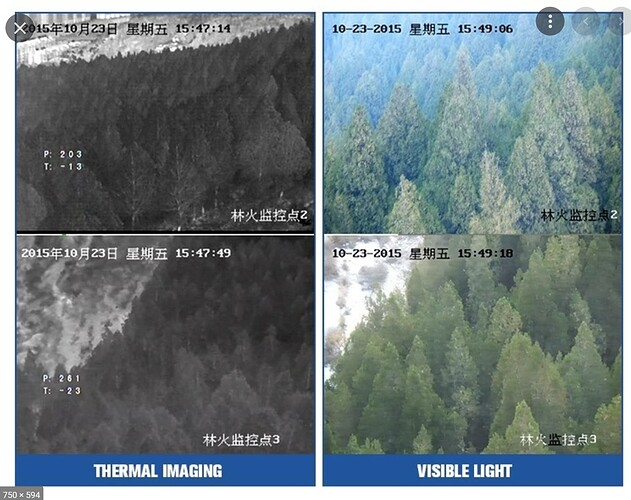 Would you have another idea of how to realize this thermal scene?

Thank you in advance

Interesting question. Some thoughts about this:

AFAIK IRay supports spectral rendering and could in theory work with any wavelengths, also outside the visible range. Thermal cameras typically cover the long-wave infrared (LWIR) range of about 7 - 14 um. That’s way outside the visible spectrum. In that spectrum range, most materials exhibit high emissivity (and thus absorption), and low reflectivity. Exceptions are mostly shiny metals. Also, the emission of most light sources is very low in that range.

To realistically render this, you need to have a good simulation of the temperatures of objects in the environment, together with the emissivity values of their materials. That’s not easy and can get quite complex already for simple scenes. There’s the sun heating objects, there might be highly emissive things like fire or machine parts getting hot, and there’s also the weather, in particular ventilation/wind which might be necessary to be taken in account. Not many of these are actually done by Omniverse itself, and although there might be a fire simulation, it is most probably tailored to be realistic in the visible spectrum and will know nothing about the LWIR spectrum.

If there is an accurate thermal camera simulation somewhere, I would be very interested :-).

Hi @margaux.bout37. I heard back from an iray developer:

We don’t have anything like a thermal camera. While Iray does spectral rendering, this only covers the visible spectrum.
However, one can setup the fires as light sources (which they should be anyways) and remove/disable all other light sources. Emissive volumes require a relative recent version of Iray (>=2022.0.0 beta). I don’t know if the customer already has a sufficient version. If he has, the manual [1] shows the required MDL material.
Then, looking at the irradiance target, one would get a false color rendering. If a visual cue, where the fires are, is everything that is needed, this would be sufficient.
Note that this visualizes brightness and not heat. The light would still bounce around based on the material properties. By enabling the white mode on top, one could easily ‘remove’ the materials from the scene. I am not an expert on heat transfer, but it would probably be more correct to setup diffuse transmitting materials with subsurface scattering. By changing the volume coefficients and surface albedo for different materials one could even model proper heat transfer rates. I have no idea how close one can get to real thermal simulations with that approach, but it would be an interesting experiment.
[1] https://raytracing-docs.nvidia.com/iray/manual/index.html#volumes#emission

I am also looking for a solution for the infrared camera simulation. I have not tried it myself, but the emissive material approach would have been my proposed solution too. I have spent a lot of time searching the web, but a true infrared simulation doesn’t really seem to exist in the public domain. All I can find are shaders that give a scene an “ir” look. If anyone here has a promising solution or resources, I would be very appreciative if you could post it.

I also had the idea of doing IR (especially during daylight) in 2 passes: