UE4 Connecter: How to export Skeletal Mesh animation to Omniverse?

Skeletal animation is not supported?

This should just work seamlessly given your description. I assume that you are attempting to view the exported USD in Create? There’s no such thing as “Omniverse sequencer” yet, so I want to be clear where you are trying to view the animation.

I will dig around and try to see what might be wrong with this until I hear back from you, thanks again for reporting your issues and questions!

No, I am not using Create.
Unreal level to Omniverse → open USD from Nucleus server in Unreal (please refer to attached image) 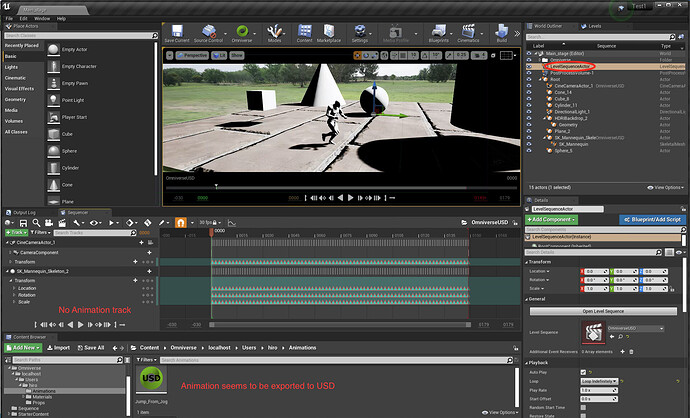 when hitting play camera moves but no mannequin animation.
Mannequin does not have blueprint. just a simple skeletal mesh.

I have reproduced your the issue where the Skel Mesh animation doesn’t play in Unreal Engine when imported as USD in the 100.3 version. We have a hotfix (100.4) that will be released very soon that fixes this. I’m sorry about the malfunction.

Hotfix 100.4 is out and should address this issue.

Interestingly the HumanFemale_keepAlive appears to be working okay.

PS. The animation track exists but is empty.

Thanks for this report on the Pixar USDSkel examples. I found two issues:

Sweet! Thanks for taking a look and filing those issues.

Jason, the HumanFemale USD sample import issues are fixed and will be released in the next hotfix. Thanks again for reporting them! You can watch the Unreal Connector Updates thread to be notified when we release it.

We released the 100.6 hotfix which addresses this issue, please check it out!