I will apply this patch next week and provide you with the results. Thanks for the follow-up.

I’ve been able to try out this change. Note that I needed to add a parameter to get this to compile: “__flush_dcache_all(NULL);”.

This change induces a consistent 4ms delay across the capture period. I’ve taken one recording of a 10000 sample period (~20 minutes) and observed two instances where, in addition to the 4ms delay, there is a ~1ms jitter.

Thanks for your report.
Could you also help to try this patch.

I needed to change the “#include” to reference tegra-mce.h as I don’t have a tegra-cache.h in my version of kernel. Running this, I see similar behavior – consistent 4ms delay overall and instances of 1ms jitter.

Y-axis in these plots is delta time between frames. We capture using a 10 fps trigger, so expectation is 100ms (100000us) between captures. X-axis is frame #.

The two following plots are the recorded deltas for a single 10000 frame capture period, using the DCACHE flush patches from above: 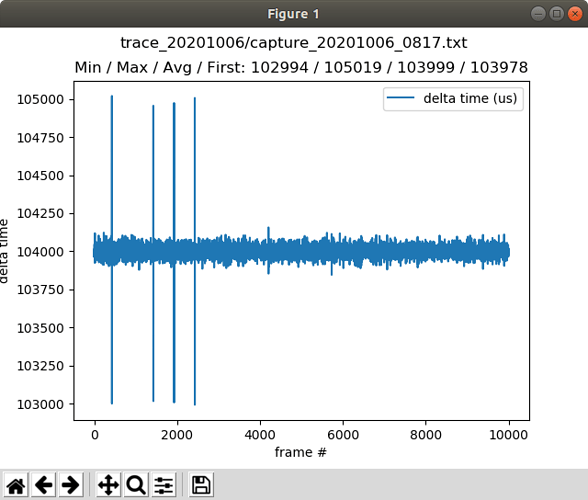 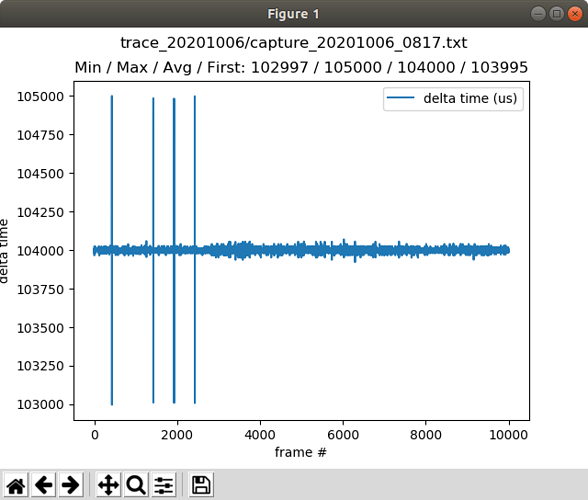 The two following plots are the recorded deltas for a single 600 frame capture period, using the original dma-mapping.c implementation. Note that the V4L2 → application deltas do not coincide with the VI → V4L2 deltas, and the deltas in the latter are actually quite small (roughly +160us at worst.) 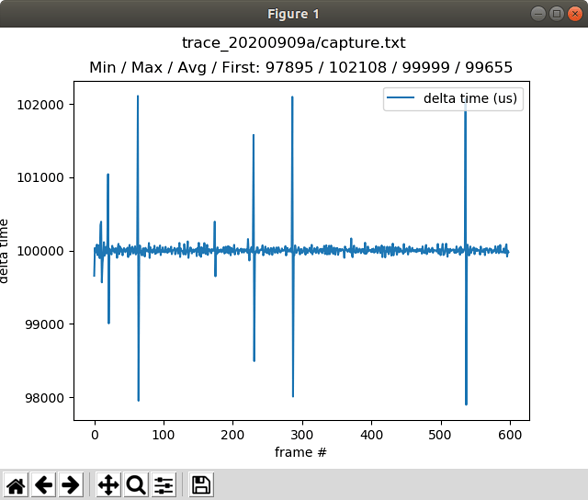 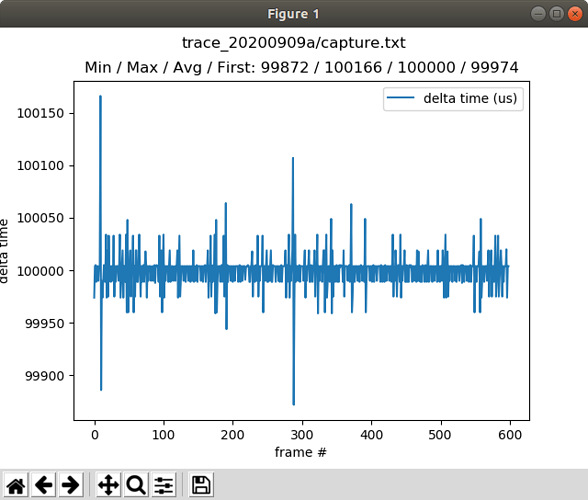 So do you means, the delay worsens from ~2ms to ~4ms than the patch from V4L2 capture jitter problem - #23 by ShaneCCC

I’ve updated the plot post above and have numbered the plots from 1-4. Plots 1 & 2 show the DCACHE flush behavior. Plots 3 & 4 show the previous behavior.

Plots 3 & 4 show a consistent delta time of 100000us (which we’d expect at a 10fps capture rate). Plot 3 shows several “spikes”. Three of these are on the order of the 2ms jitter that caused me to write this post.

So do you means, the delay worsens from ~2ms to ~4ms than the patch from V4L2 capture jitter problem

An overall delay of 4ms is introduced by the DCACHE flush, and an additional 1ms jitter is observed on top of that.

I hope this is clear. If not, let me know and I’ll try to clarify further.

tegra_flush_dcache_all() shouldn’t be used for all sync requests. For smaller buffers, it wouldn’t be beneficial and increases the cache sync overhead significantly.
It should only be used when the buffer length is > few_mb. Could you start with buffer_length >= 1MB and check.