I am trying to encode video at ultra low latency settings and I am seeing effect for which I don’t have good explanation.

Environment is: NVIDIA 1080 Ti GPU, 1920x1080@60 video signal, NV_ENC_PRESET_LOW_LATENCY_DEFAULT_GUID and other low latency targeting settings (I am under impression fine tuning with settings is not so much important).

I am encoding in Windows 10, I am using async version of the API and I wait for event that signals completion of bitstream. (It is not directly related, but I also did polling and subframe readback and the behavior is consistent through all the modes).

The problem is this: when I am doing encoding I see encoding latency of around 3 ms per frame during a few first seconds of encoding, then it goes up to 7 ms, then in a while it stabilizes on 10 ms level. Sometimes it can go back to 7 ms for some time and then jumps back again to 10 ms.

When I refer to encoding latency it is about time between NvEncEncodePicture call and event triggered as a result of encoding completion.

The encoding is rock solid in terms of stability and so is this latency pattern. I see that hardware can do 3 ms encoding but it switches to slower mode, such as [I am guessing] a result of thermal self-balancing. I wonder if there is any way programmatically or via interactive setup to affect this behavior?

Other things I tried:

I see that GPU encoder is doing well at stable low latency when it’s idle and the encoder is basically capable to operate fast. However in scenario with live 60 fps signal, mixed load (encoding and frontend application activity such as 3D app or video playback application) and underloaded GPU in general I see that encoder degrades its performance to 10 ms latency for no clear reason.

Is there something I could try or maybe there is a well known reason for such behavior?

Thank you for your attention to our challenge.

The primary system I am using for testing displays this:

We are building against Video Codec SDK 6.0.1. To my best knowledge the issue is present when I was using SDK 8.0.14, even though it might be worth a re-check.

Yes, the issue is related to mixed load. The originally posted issue is exhibited with the following load:

The image above corresponds to the load mentioned above.

Additionally, I tested encoding of generated content (simple Direct2D output into Direct3D 11 texture then used as encoder input), with encoding running ASAP. If I generate video on this 1080 Ti GPU then encoder is running at stable 7 ms/frame. If I use integrated Intel GPU for Direct2D and then pass the prepared texture to 1080 Ti GPU, then encoding is at constant 2-3 ms/frame.

I will see and follow up pm what test app I can provide.

Having a reproduction app built (rypark, I messaged you on it), I see that the problem is not specific to GTX 1080 Ti. I can see the problem with GTX 750 as well when I measured more accurately: 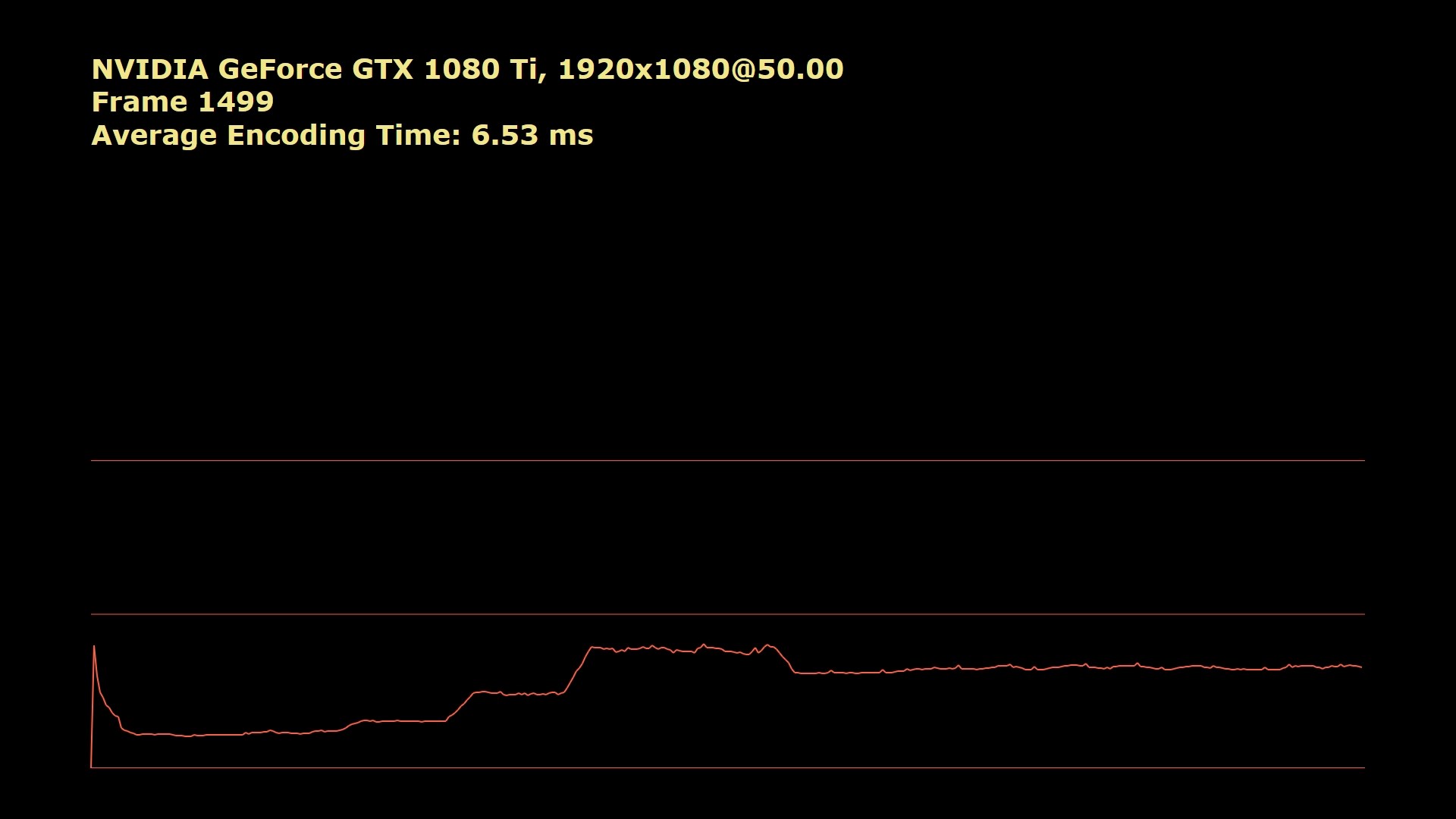 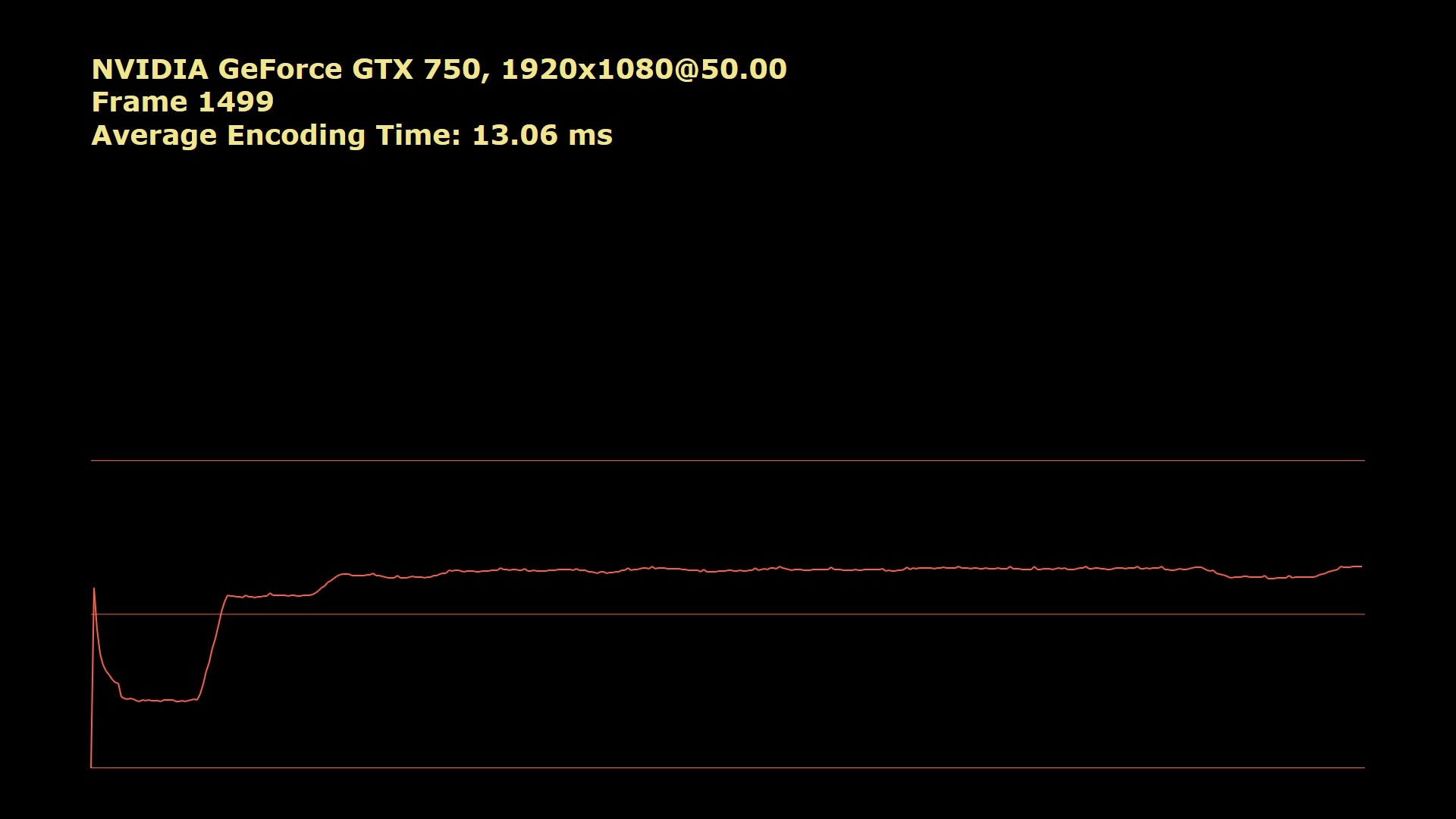 What is the conclusion of this problem?
What causes the fluctuation?