Hi Everyone! We’re looking for some input on Linux . Specifically, if you were able to run CloudXR on a remote server powered by Linux, which distribution would you choose? Please feel free to provide any details and thoughts for your preference.

If you’re interested in sharing in a structured format, this 1-minute survey is also available for feedback. 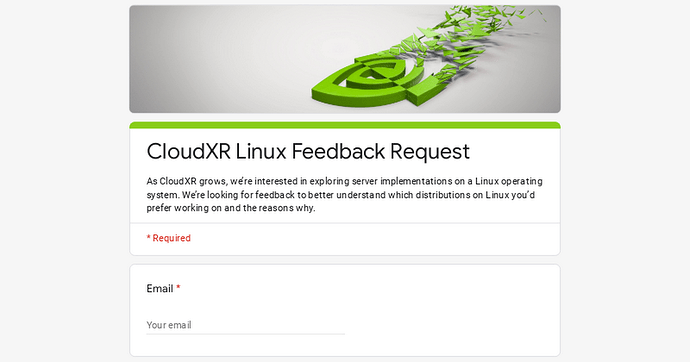 As CloudXR grows, we’re interested in exploring server implementations on a Linux operating system. We’re looking for feedback to better understand which distributions on Linux you’d prefer working on and the reasons why.

I’m using Ubuntu LTS because it’s based on Debian with, arguably, “end users” compromises in mind. That means a lot of packages and their support for gaming to government eID will usually work there earlier and longer than elsewhere, at least officially.

I have been using it on a daily basis for years and only use Windows when I’m coerced into it, e.g corporate setting without the ability to chose or specific products, e.g CloudXR, with that requirement.

Overall using Linux with XR has been pretty flawless, including buying games on Steam, for research purposes of course, and either having direct support or thanks to Proton GitHub - ValveSoftware/Proton: Compatibility tool for Steam Play based on Wine and additional components

With the popularity of the SteamDeck I can only imagine the trend will improve, a lot more hands and eyes to provide feedback with e.g ProtonDB, with an incentive for developers to at least not prevent compatibility…

Finally and I believe more importantly in this context, for scalability Linux is in DevOps the de facto standard. From basic CLI tools to containerization to orchestration, scale comes from the ability to combine through tools interfacing properly. Both the culture of free and open-source with the UNIX Philosophy “do one thing and do it well” from piping in the command line provide a very efficient environment for free recombination that remains reproducible, thus scalable. The latest example for the cloud being combining all those properties with cloud-init that also became a de facto standard supported by AWS and countless other providers.

Finally and on a less pragmatic perspective, I’m excited by the prospect of having more exotic devices, like the Lynx R1 or Project North Star building on open-source with its communities, remain on a non closed source environment. This is obviously not on the scale of popular devices like the Quest but is used by passionate knowledge builders who rather than “just” consume contents also implement crazy ideas that move the overall field forward.

So… any estimated release date?