Driver in unknown state after attempting to install cuda. Ubuntu 22.04

I have a fresh install of Ubuntu 22.04, the first thing I was trying to do was get CUDA working. I had swapped over to “NVIDIA driver metapackage from nvidia-driver-510” using the Additional Drivers tab of Software & Updates.
I was able to confirm the driver was working and saw the expected output after a “nvidia-smi” call

I was using this guide to install cuda, trying my best to follow the Ubuntu instructions.

The order of commands was:

EDIT: I just saw the wget command has “ubuntu2004” when I’m using 2204. Maybe this is the source of the issue, but I have no idea how to recover the current situation still.

Everything was successful until the last cuda install command, which has the output:

Seeing this, I tried to roll back to an earlier driver. Using the “additional drivers” tab again I attempted to swap to “nvidia-driver-470”.

After a restart it told me that failed, unfortunately I don’t have that error anymore, but commands to “nvidia-smi” fail now, and my “additional drivers” tab looks like this: 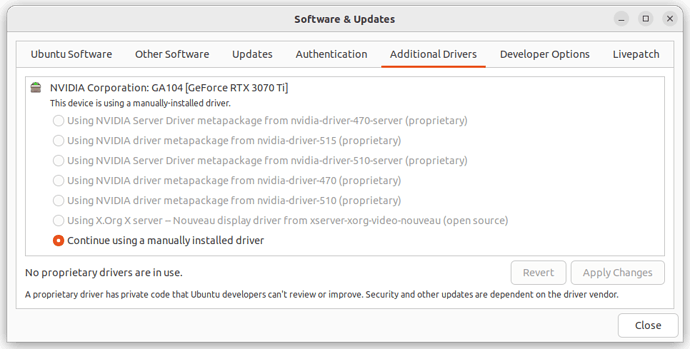 I have tried to revert the drivers back to a known state with sudo ubuntu-drivers autoinstall but get identical output as when I tried the cuda install.

Any ideas on how to proceed?

Hey, I was in the same state on 22.04 fresh install. I had nvidia-kernel-common-510 installed:

sudo apt-get -y install cuda worked for me afterwards. Hope this works for someone as well.

Thank you. That worked for me as well.