Hi, thanks for your attention!
When I load the Modulus v22.03 docker container and want to run with multiple GPUs by mpirun -np 4 python ldc_2d.py, I met an issue as shown in the figure: mulitple process will shown on rank 0.

This will make simulation hangs in there. Is this expected?
Any comments on how to solve this issue are appreciated?
@TomK @ramc
Thanks

I am hoping @ramc can help, as I am not a technical resource for Modulus.

Hello, so the multiple processes on GPU 0 are expected. Can you post an output of where it hangs? We have not encountered this before. Does it run fine on a single GPU?

Thanks @ohennigh. It runs fine on a single GPU.
For multiple GPUs, I run with mpirun -np 4 python ldc_2d.py or any other examples, it hangs after print [step 0] loss. 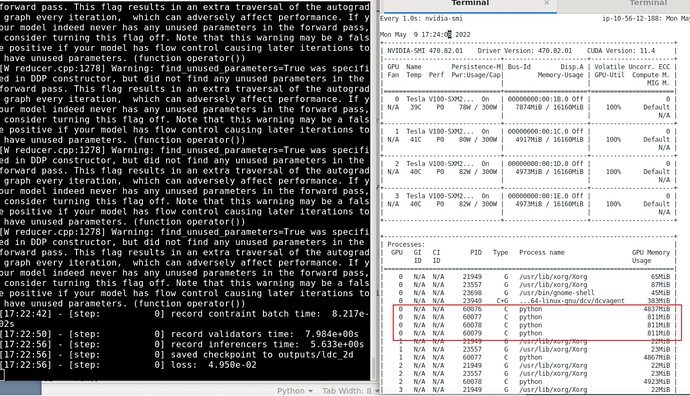 I’m suffering from the same issue. When I tried to run fpga_flow via mpirun it hangs right after the first step.

Furthermore, after training it with a single GPU, I tried to run fpga_heat via mpirun and some error occurred. I suspected that it is related to the find_unused_parameters option in DDP, so I edited it to be False within continuous/constraints/constraint.py. At first glance it seemed it works as I saw all GPUs were being used through nvidia-smi, but the problem is that the training is not accelerated at all - at the same speed as a single GPU.

Thanks @sy0319.kim for your experience.
@ramc @ohennigh This seems to be a common issue. I suggest you also test using NGC. Please let us know if you have any suggestions on the MPI hanging issues

Was this issue resolved? I am stuck with the same problem running 2 Quadro RTX 5000s. Running the examples with a single GPU works fine but whenever I try to utilize both using mpirun as explained here, the program will go through the first step then stop, leaving each GPU at 100% utilization indefinitely until I kill the program.

Experiencing the same issue that the fpga froze after step 1. I am using the modulus 22.03 container.

It turned out that if you turn off the validator, the program will continue running.

It is suggesting that there is a bug in validator whey applying multiGPU.

There was a bug for FPGA multi-gpu that is related to the validator confusing DDP, as @yunchaoyang pointed out in 22.03. This has been corrected in 22.07. If the validator is absolutely needed in this version, you may want to try setting requires_grad=False to see if that fixes the hang or shut if off during training.