I noticed that today’s driver release includes support for Wayland Vulkan surfaces - thanks so much for adding this!

I did notice, however, that opacity is an issue when the window surface has an alpha channel (who could have guessed that alpha might some day represent opacity!). Normally you can just set VK_COMPOSITE_ALPHA_OPAQUE_BIT_KHR to prevent that, but it doesn’t appear to make a difference. OpenGL has the same problem, but that’s already being addressed via EGL_EXT_present_opaque (which is my next most-wanted feature!). 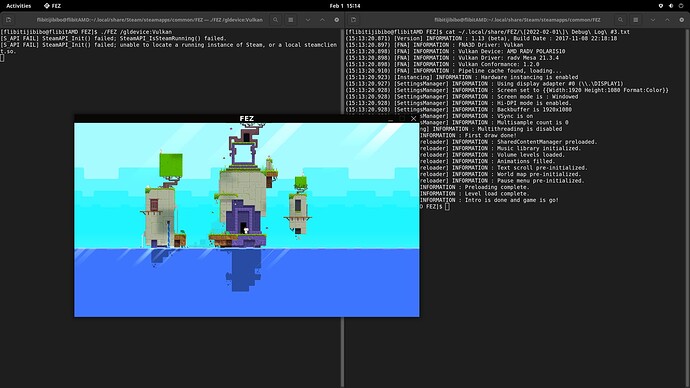 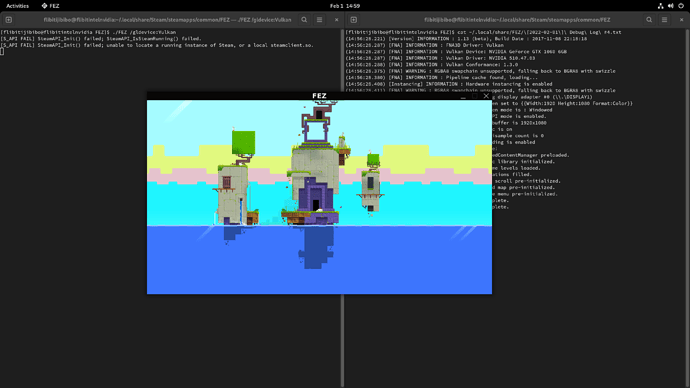 flibitAMD shows the correct opaque rendering, while flibitIntelNVIDIA shows the bug in screenshot form (on the actual display it looks closer to the correct image, but the background layer ordering is messed up).

Checked just in case: VkSurfaceCapabilitiesKHR.supportedCompositeAlpha is set to 0x1, suggesting it only supports opaque presentation. Commit:

Bumping this with a minor update since SDL 2.0.22 is coming out really soon - for testing purposes I’ve pushed a Steam beta of FEZ (appid 224760) which uses the very latest Git revision of SDL and an updated FNA/FNA3D. This is the quickest way to demonstrate the opacity issue and can be seen as soon as it starts fading to the title screen.

As of the latest driver and egl-wayland tag, OpenGL now has opaque presentation support! Unfortunately it looks like Vulkan did not get the same treatment. Any chance we can get a Vulkan equivalent for this commit?

In acquire_surface_image we send our format to the compositor using the dmabu…f protocol. If we are ignoring alpha due to the present opaque extension, then we should advertise DRM_FORMAT_XRGB8888 instead of DRM_FORMAT_ARGB8888. We only have to worry about these two formats, since every EGL config we advertise on wayland that has alpha is of format DRM_FORMAT_ARGB8888. We can do nothing for formats besides this, since it means the app is using the EGL_PRESENT_OPAQUE_EXT attribute on a DRM_FORMAT_XRGB8888 surface. This change also adds a hook for eglQuerySurface, so that we can report if EGL_PRESENT_OPAQUE_EXT is set or not.