When using Vulkan 1.3 with dynamic rendering enabled (not as an extension, but as a Vulkan 1.3 feature) the use of mixed samples (enabled via pNext chain of vk::PipelineRenderingCreateInfo linked to the vk::AttachmentSampleCountInfo[AMD/NV] struct) DOES work when using 1 color attachment and 1 depth attachment.

The crash happens (without validation layer errors) when you mix different color attachment sample counts, as in my case:

The crash happened with and without validation layers in the same way. It did not crash in the following configuration:

So swapping the orders did somewhat help, but it did not render anything to the 2nd attachment (1st did render like it supposed to).

The exact same (engine) code is tested on the latest Adrenalin drivers from AMD on a laptop (Windows 10 Home 64 bit 10.0.19044 Build 19044, Adrenalin 22.5.2), where it works without any crashes or errors. Of course, the only thing different on the laptop was using VK_AMD_mixed_attachment_samples instead of VK_NV_framebuffer_mixed_samples

Note 2: I’ve already submitted a bug report to the NVIDIA Developer Support Submission Form, (found that page on How to report a bug) so I do not know if this is a duplicate, or that the page (the Game Development Support Form) is not actually for bugs)

Still not fixed as of GeForce Game Ready Driver 516.59

Please provide a minimal test code with executable. We hve no enough information.

Hello, sorry for the delay. Here is the solution:

It also crashes without any validation layers warning. 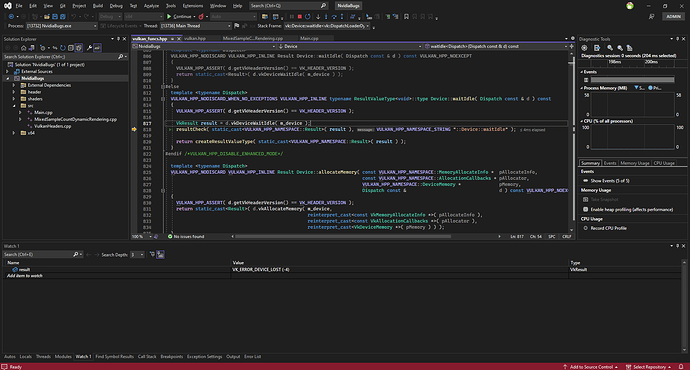 I cannot edit the title and/or the original post anymore, so I’ll just add a reply to the original post, hope that’s enough. Unless there is a different way to update the error description I’m not aware of…

Aplication crashes because I’m using unhandled C++ exception, so the actual error is VK_ERROR_DEVICE_LOST, see this reply for a minimal test code with executable.

Hi there and a belated welcome to the NVIDIA developer forums to @weteringt!

The change in description actually helped, thank you @AndreyOGL_D3D for pointing that out. I did some digging and it seems that there was a another issue here in the forums with similar error behavior.

Following that and potentially the bug report from weteringt there is a fix being deployed with one of the future driver updates. I don’t expect it as part of a 52x release anymore, but early on with 53x it should be there.

Hopefully that will address the problem in this post!