We’re using EGL Stream API to share video frames from single input to multiple applications. There is one process running as a video server, responsible for capturing and sharing frames. Server runs constantly in the background as systemd service. Also, up to 3 additional processes could be started anytime as a video clients. 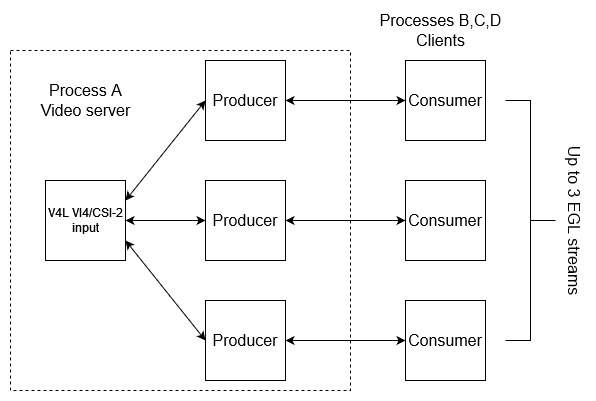 Issue - On the server (producer) side there is a DMAbuf file descriptors leak after disconnection/reconnection of the clients.

Where could be the issue? Is something wrong in sample code with sequence of Stream termination?
Any help is appreciated.
Thanks!

Hi,
The demo of EGL producer/consumer is shared in this post:
Problems getting EGL Stream transferred to another process on same machine - #7 by DaneLLL

Please check if you can make a patch on this set up so that we can run and reproduce it. And would be great if you can upgrade to Jetpack 4.6.2 and try.

Hi,
Thanks for quick reply.

I’m aware about this demo. But our case is different. We have CUDA producer/consumer instead of OpenGL producer/consumer used in eglstreamcube/ctree/gears. That’s why I’m using demo from official Nvidia’s cuda-samples repo - EGLStream_CUDA_CrossGPU. It matches our case.
Patch and steps for reproducing are attached to original post under “Test setup” section. Just in case, “Test setup” section is collapsed for convenience. All technical details are there. Using them you can easily reproduce issue on your side.

I tried latest L4T 32.7.2 on my setup. Observe the same issue. I used same code and steps, as described in my original post under Test setup section.

Hi,
We will set up and try to replicate the issue first. And then do further investigation.

Hi
Please check this user guide It is for Drive platform but similar on Jetson platforms. Generally we create consumer first and then producer. And consumer can be alive to wait for producers. It is same as this demo:
Problems getting EGL Stream transferred to another process on same machine - #7 by DaneLLL

Please check if you can adapt to this standard way.

Hi,
Have you been able to replicate issue on your side according to my steps?

Thanks for pointing me out.

I checked this user guide. It’s the same as used in L4T documentation for 32.4.4 release. Wasn’t able to find something new there.

We’re following these guidelines. And looks like in github samples from Nvidia you’re also following them. But the difference is that in our case and in EGLStream_CUDA_CrossGPU case CUDA consumer/producer are used instead of OpenGL ones.

In my test setup (based on EGLStream_CUDA_CrossGPU) consumer was created first. As you’re suggesting.

I did that intentionally to simulate behavior closer to our real case. We can’t keep consumers always running, because they’re desktop applications. Users of the system can open/close them at will any time.