I just got updated that the GeForece RTX 3060 says that it uses DP1.4 ports, but doesn’t support MST.
I didn’t find any online source that stated that this wouldn’t be useable.

I thought that MST was first possible at DP1.2 and must be integrated since DP1.3, so why can’t i use it with my RTX3060?

Is there a Software or Firmware Update available for that?

Hello @MrCrie94 and welcome to the NVIDIA developer community!

Would you mind sharing where you received that information from and what Graphics card specifically you have?

I will check internally to get more details on current support status of MST.

Hello MarkusHoHo,
My graphics card is a “ZZ ASUS Dual GeForce RTX 3060 OC, DUAL-RTX3060-O12G”.
build in an ASUS ROG Strix X570-F.
I got the information from Kasim (support@nvidia.zendesk.com).

Did you get any information?

I don’t have all the information I am looking for yet, I kindly ask for a little more patience.

By the way, are you planning to use an MST Hub and if so, which one?

Yeah, sure, Thanks for looking into it!
Nope, no MST-Hub.
The Monitor itself supports daisychain, so it got an input and an output for the second monitor.

sorry this took a bit longer. I received confirmation now from engineering that the 3060 by supporting DP1.4 will also support MST and DisplayPort daisy-chaining.

We do NOT however support MST Hubs, that is why I asked about those.

This information was lost in communication between NVIDIA and the Help-desk personnel you received your original reply from, this sadly happens on rare occasions.

I hope I could help!

Ok, so now i got the confirmation, I hope we can fokus on the main Problem.

Nvidia and Windows(10 Education) both, recognice the second monitor, but it shows no picture.
I use following setup:
This here as main cable, an AOC-15m-DP1.4 witch connects lossless: DIGITUS by ASSMANN Shop | DisplayPort™ AOC Hybrid Glasfaserkabel, UHD 8K, 15 m
A standard DP cable for the connection betweed the two monitors (was in the monitor pakage)
The Nvidia RTX3060 OC as grapicscard
And 2 : BENQ PD2500Q, 25" (Grafik-Monitor BenQ PD2500Q für Designer | BenQ Deutschland)

Drivers and Windows are Up-to-date and it once worked, but since it’s long ago i don’t know which version it was.
Also i can’t roll back to a backup because my shadowcopies are to young.

We have regression tests that validate these kind of features in our drivers. I also checked with our QA department and our internal testing of DP features version 1.2 and newer still passes. Of course we do not have the exact same setup as you, making it difficult to help troubleshoot.

A few typical steps that I would consider and which you might or might not already have done:

There might be more, but let’s start with this. Let me know if this helps in any way.

When i deaktivate MST on the Monitor, both Monitors share the same screen, so i roule the cabeling out.

Does this mean that you still have a Daisy-Chain Hardware connection and you get a signal to both screens, just that it is cloned desktop instead of extended desktop? That might give some more clues that I can pass on to our experts about what goes wrong here. Can you tell me which NVIDIA driver version and which build version of Windows you are using?

On the note of enabling MST I could also be wrong regarding enabling it on both monitors. The second monitor would only need MST enabled in case there is another, third monitor attached. Disabling MST on that monitor could be another thing to try.

When I deaktivate MST, Windows/Nivida won’t recognice the second Monitor anymore.
I guess the Monitor just transfers the signal 1 to 1 to the second monitor, but without “telling” the PC.

I know about disabling MST on the last Monitor, so it “always” was :)
(Exept of couse, in some tests, to rule out some things)

If the Updates are geographically different, i live in Europe/Austria/Vienna. 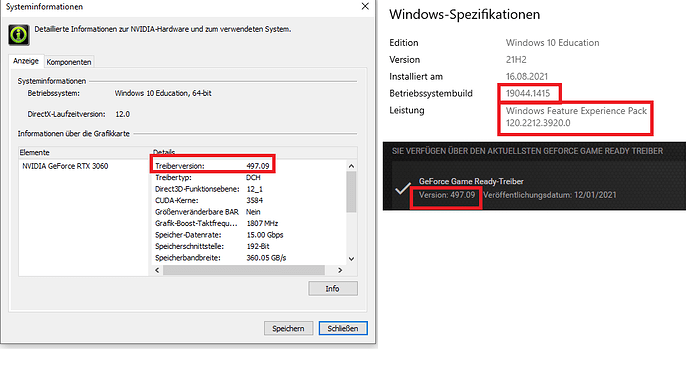 If you would like to check the settings/etc. via a Team-session, where you can tell me what exactly you need, then that would be no problem.

Thanks for the details!

I am afraid at this point I don’t have any further suggestions beside what I said before, switch the order of monitors and use different (shorter) cables to rule out any bad signal/connection issues.
Of course you can always try older NVIDIA driver versions and see if that changes anything. That would also help us open and prioritize a driver bug.

I will check internally again if we have seen similar issues with MST and the most recent drivers. Although my last information, based on the previous driver version was that all our MST testing is passing.

When i deaktivate MST on the Monitor, both Monitors share the same screen, so i roule the cabeling out.

Quick follow-up on this. I learned that the bandwidth requirement in this scenario are much different from full fledged MST, so please do try with DP 1.4 certified, short (max. 1,5m) cables and verify the same problem occurs.