Hi Nvidia staff, just trying to understand the fan management part of the Nvidia Settings using the 525 Driver and Ubuntu 22.10 with Kernel 5.19. If the video card has 3 Fans (It is the Zotac RTC 4090 Extreme Airo) as shown here: 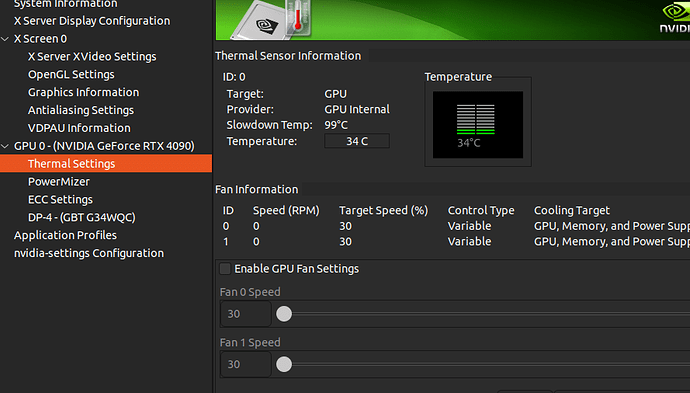 That’s a known limitation of the linux driver, likely because nvidia only builds two fans into their FE models.

As far as I understand, it’s not just the Linux driver; the driver core on other platforms only supports up to two fans also. For GPUs with three fans, the extra fan is either tied to the speed of the second fan, or is controlled through some third-party app that’s provided by the GPU vendor.

My observations:
There are three-fan designs where two fans are tied together.
Then there are three-fan designs where all fans are independently controllable, on Windows though e.g. MSI Afterburner.
-but-
It doesn’t need to be a MSI card, e.g. an ASUS card’s third fan can also be controlled by MSI Afterburner. So my conclusion is there’s actually a common third fan controller, exposed maybe through NVAPI.
IIRC, there’s also some weird 4-fan design by some vendor, this really needed vendor specific software.

Hi everyone thank you for the clarification. At @generix @aplattner you are right. It is tied, so what I did was go to the nvidia-settings and set one of the fans to 100%, the other one to the lowest value which is 30% (It did not let me put it on 0% or anything lower than 30%). But I was able to visually see that 2 fans were super fast and another one was a slower. So yes, 2 of them are tied together as you have mentioned. Thank you.