I have an X Server Configuration that I made using the NVIDIA X Server Settings application in Ubuntu 20.04.1 LTS x86_64 i.e.: 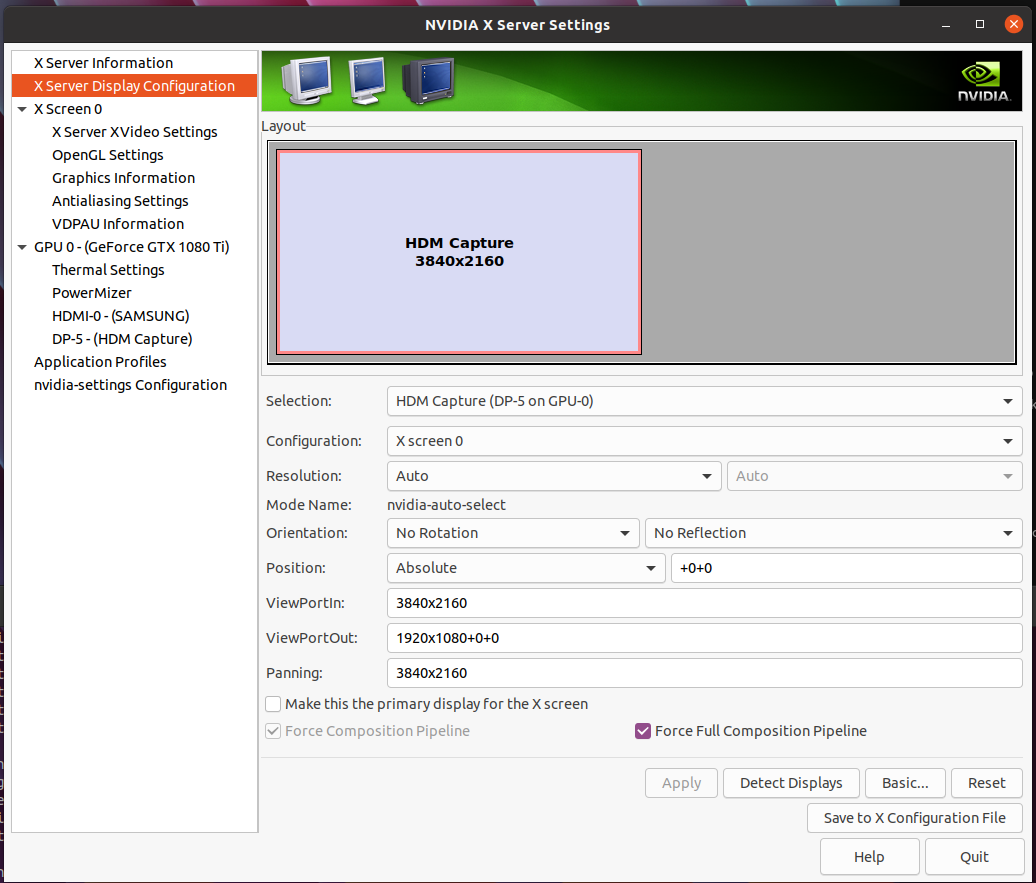 The configuration is as follows:

I noticed first that at boot, my configuration is not loaded so I created a .xinitrc:

From the screenshot, it looks like you’re using GNOME. Is that correct? GNOME has its own display manager control panel and will try to apply the settings from that automatically when it detects monitor hot plug or unplug events.

Please try configuring the display layout you want in the GNOME control panel rather than in nvidia-settings.

Wow thank you so much for the quick response!

Yes I am using GNOME. Unfortunately the display manager control panel does not correctly identify the resolution of my second monitor/display so I cannot make the correct selection (whereas I can with NVIDIA manager). Is there a way to disable GNOME hot/un-plug events (or load NVIDIA config for these events)?

Also FYI on last reboot my NVIDIA configuration was not loaded at login.

I’m not sure. There used to be an option to disable the xrandr handling in gnome-settings-daemon, but I don’t think that works anymore. I’d suggest filing an issue against GNOME about the missing resolutions.

The DP-5 output is actually connected to a capture card hooked up to Pi-KVM. Allegedly the capture card is capable of 4k pass-through though I have had varying mileage with this - additionally just switching the input to the capture card pass-through output is not a legitimate test since in doing so a hotplug event is instantiated (causing the native display manager to attempt reconfiguration). However, the actual capture is 1920x1080.

Some helpful info for my case:

These tools may also override some types of settings that are stored in and loaded from the X configuration file, such as any MetaMode strings that may specify the initial display layouts of NVIDIA X screens. Although the configuration of the initial MetaMode is static, it is possible to dynamically switch to a different MetaMode after X has started. This can have the effect of making the set of active displays, their resolutions, and layout positions as configured in the nvidia-settings control panel appear to be ineffective, when in reality, this configuration was active when starting X and then overridden later by the desktop environment.

If you believe that your desktop environment is overriding settings that you configured in nvidia-settings , some possible solutions are:

Some systems may have multiple different display configuration utilities, each with its own way of managing settings. In addition to conflicting with nvidia-settings , such tools may conflict with each other. If your system uses more than one tool for configuring displays, make sure to check the configuration of each tool when attempting to determine the source of any unexpected display settings.
My displays are reconfigured in unexpected ways when I plug in or unplug a display, or power a display off and then power it on again.
This is a special case of the issues described in “The display settings I configured in nvidia-settings do not persist.”. Some desktop environments which include advanced display configuration tools will automatically configure the display layout in response to detected configuration changes. For example, when a new display is plugged in, such a desktop environment may attempt to restore the previous layout that was used with the set of currently connected displays, or may configure a default layout based upon its own policy.

On X servers with support for RandR 1.2 or later, the NVIDIA X driver reports display hotplug events to the X server via RandR when displays are connected and disconnected. These hotplug events may trigger a desktop environment with advanced display management capabilities to change the display configuration. These changes may affect settings such as the set of active displays, their resolutions and positioning relative to each other, per-display color correction settings, and more.

If display hotplug events are resulting in undesired configuration changes, try the solutions and workarounds listed in “The display settings I configured in nvidia-settings do not persist.”. Another workaround would be to disable the NVIDIA X driver’s reporting of hotplug events with the UseHotplugEvents X configuration option. Note that this option will have no effect on DisplayPort devices, which must report all hotplug events to ensure proper functionality.

It would be nice to know exactly how NVIDIA configs, xrandr, and display manager interact to develop the needed configuration since I doubt filing an issue with GNOME will be timely.