I’m running nsys in WSL2 on a windows 11 pc.
When I generate an nsys report in WSL and open it in the windows GUI, I can see CUDA API calls, CuDNN, CUBlas…, but the CUDA workload trace is missing. 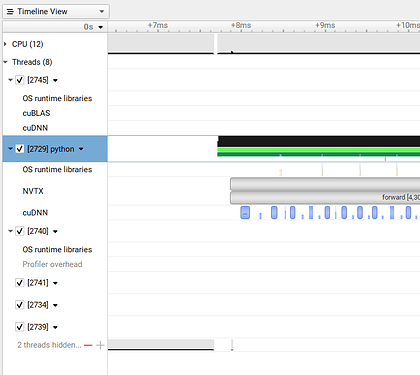 image798×712 18.7 KB
I don’t think this is a problem with the application I’m running because I tried using code in Julia, as well as this pytorch example I found online.
Is this a bug or could I be doing something unsupported?
Thanks!

edit:
Here’s an example of a generated report:
my_profile.nsys-rep (176.5 KB)

Any updates by any chance?
Thanks in advance!

The problem is that WSL user-mode processes run virtualized, so their CPU timestamps are shifted with respect to unvirtualized timestamps. Our method of getting clock synchronization between CPU and GPU work is implemented in the kernel-mode driver, which under WSL runs outside of the virtualization. So we implemented driver support to get conversion factors between the timestamps inside & outside of virtualization, and that is shipping in 520 series drivers. The only remaining work is for Nsight Systems to make use of the new driver support and add the extra layer of time conversions. I am planning to work on this next week.