I’ve tested the 465 drivers but they are susceptible to the same issue. :-(
Sadly after rolling back to the 450 drivers I have run into another issue, ubuntu keeps pushing me to update. How do I block these updates?

For those people running into this only after suspend/resume: please check if setting up this:
https://download.nvidia.com/XFree86/Linux-x86_64/460.67/README/powermanagement.html
prevents the freeze on resume.

I followed that guide but it didn’t aid me in any way. Still a hard-freeze after resume is done.

I also tried the beta driver which sets up most of the stuff in the guide directly but that behaved even weirder with my card.

But I’m a bit curios cause I don’t think experienced this issue when running Fedora 34 on the same machine. Then I switched to Ubuntu 20.04 and the issue came back…:/

I’ll try this out next week, but I’m not entirely sure why this should help. From what I understand the proposed fix relates to memory issues on suspend. There are a couple of things that I don’t get, specifically:
The GPU state saved by the NVIDIA kernel drivers includes allocations made in video memory. However, these allocations are collectively large, and typically cannot be evicted. Since the amount of system memory available to drivers at suspend time is often insufficient to accommodate large portions of video memory, the NVIDIA kernel drivers are designed to act conservatively, and normally only save essential video memory allocations.

My Quadro M1000M does not support S0ix based power management. Hence I’ll try the /proc/driver/nvidia/suspend + Save allocations in an unnamed temporary file approach. But there I’m having issues as well, it indicates the use of services, such as nvidia-suspend.service, which I cannot find. Neither in the /etc/systemd/system/ folder, nor can I find the folder /usr/share/doc/NVIDIA_GLX-1.0/samples.
If I need these services, where can I obtain them?

Same problem here, it happens whenever it suspends…

Hi there, I’ve tried the solution proposed by @generix but to (I think) no avail. Nevertheless, I’ve obtained some new date, could anybody help to make sense of them.

In my case only the systemd (/proc/driver/nvidia/suspend) with an unnamed temporary file. The S0ix-based approach is not supported by my system.

At first: I tried to reconfirm the behaviour of my system at the moment. Without applying any changes. I’m running the nvidia-driver-465 which is just installed.
I found that nvidia-suspend.service, nvidia-hibernate.service,nvidia-resume.service, nvidia and nvidia-sleep.sh at their correct locations already.
Running sudo service nvidia-suspend status indicated that it was loaded, but inactive:

The issue with the suspending (sudo systemctl suspend) was as expected, the system did hang during the wake procedure.

The issue with the hibernation (sudo systemctl hibernate) was something that I haven’t seen described before. During hibernation, something goes wrong and the system ends up starting as if it is a normal boot.
During the hibernation an output appears on my screen. I made a photo, but never managed to capture it properly. it says something on the lines of:

I can the first error somewhere in the system log, which is appended, but only after the --reboot-- while I see the message during the hibernation process already.
In the journal.txt you can find that the nvidia-hibernation.service was called upon, lines 115-117.

Is it reasonable to assume that the ‘hibernation becomes normal boot’ issue is related to the suspend issue discussed in this tread?

Planned Today: is to enable the NVreg_preserveVideoMemoryAllocations=1 kernel module parameter in nvidia.ko. I verified with cat /proc/driver/nvidia/params that this is not yet the case.
Similarly, I saw that the TemporaryFilePath is empty, I’ll point it to /run for now as is proposed.
I’ll send an update when I’ve managed to set these properties.

NOTE: I also tried to go over the nvidia readme files. Chapter 9. Known Issues send me to Chapter 16. Configuring a Notebook that does discuss suspend and hibernation issues. It does discuss three different causes for the suspend resume behaviour.

I’ve enabled NVreg_preserveVideoMemoryAllocations, set TemporaryFilePath and tested the suspend and hibernate behaviour. To no avail.

Exact steps: I tried to copy the following manual on the Arch forum.

The options are recognized.

Suspend: suspend journal.txt (724.1 KB)
The following details are of importance in this log:

Note: I’ve found other posts that also discuss this solution for an issue that is apparently equal to ours. The advice there also surrounded the memory handling of sleep. But it did not solve their issue either. Interesting however are the remarks [1, 2] of an Nvidia moderator that there is work done on the suspend/resume behaviour of the 465.19.01 beta.

I’ve just added more memory to my system, sadly it didn’t help. But before suspend, I did have more than double my gpu memory as free space on system memory.
I’m at a loss to the cause of this issue.

This is probably obvious, but the issue disappears when Prime Intel (Power Saving Mode) is selected (normally I run the ‘Nvidia on-demand mode’). In the sys log below you can find several reboots:

In terms of behaviour, there was a small change: Now my screen turns black immediately upon loading the module, no flickering of the backlight as observed with 460/465 versions.

There’s now also more in the kernel log (of course also contained in the bug report):

Any ideas welcome. There’s currently no maintained functional driver for these cards, unless I go back to the legacy drivers.

The non cropped file is appended (journalctl -b -1.log.gz), as is the NVidia bug report (nvidia-bug-report.log.gz).

To finally fix this on my machine I uninstalled the nvidia driver deb packges and reinstall them using the NVIDIA-*.run install file instead and it worked. Now I’m running Elementary OS using nvidia without sleep-resume crashing.

Feels like whomever is packaging the nvidia-drivers for Ubuntu is doing something which doesn’t play nice with my laptop.

This is an interesting route to pursue, I to run on drivers installed via a PPA for Ubuntu variants. I’m not exactly clear on where to submit the bug report. Originally I expected that I had to report it to the organization that made the ppa:graphics-drivers/ppa but only 3 bugs have been made there in the past. Besides I get the issues also from the drivers that are packaged by the Ubuntu team itself as well. That is I get the problems also when using nvidia-graphics-drivers-470 maintained by the Ubuntu Developers (see for the 460 and 465). These have way more bug reports, and the team seems to respond.

@chris.bainbridge made a bug report about it already, but I don’t see any mention in the 465 and 470 sites. Should I make one?

We are tracking issue internally with bug number 3358939 .
We are currently trying to duplicate issue locally.
Shall keep everyone updated on it.

Hi i have same issue Hp Zbook G5 ,yesterday just update to Nividia-driver-470 and got error any help please 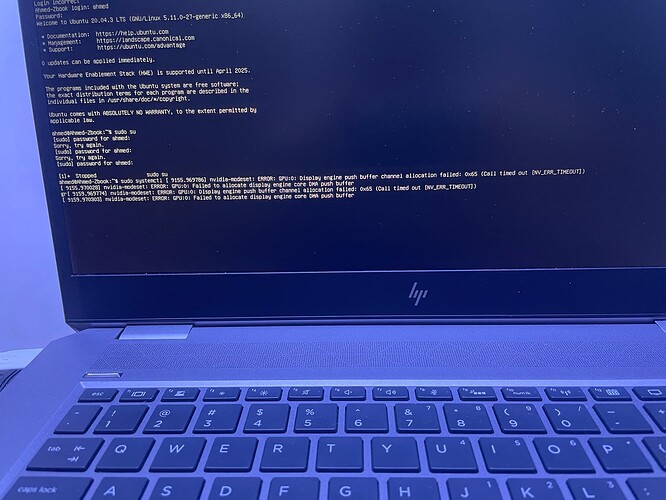 Tried to switch to other driver versions in “Software and Updates” → “Additional drivers” - didn’t help (tried all available versions there). Also tried to install latest Nvidia driver from nvidea.com - didn’t help as well.

The only solution that worked for me, was to install nvidia-driver-450-server driver, but not from “Software and Updates” GUI, but from terminal, like that:

Any updates on this?