My HDMI port on the Razer Blade Advanced 15 has not worked since I installed Ubuntu 20.04 (when I bought it in June 2021). I’ve not needed the HDMI port until now, so I thought I would upgrade to Ubuntu 22.04 and maybe it would fix it…it didn’t.

Per many support threads out there, it appears to be related to my NVIDIA driver.

I get the following:

I have tried the following commands with no success:

Here’s what I am using:

Any help would be appreciated.

I ran the bug report:

You’re currently running a non-standard kernel without the nvidia driver installed. An earlier boot with the nvidia driver resulted in
NVRM: GPU 0000:01:00.0: RmInitAdapter failed! (0x22:0x56:731)
which would point to defective hardware.
Please boot to the standard 5.15 kernel and check if it reproduces.

I had the same issue in 5.15 kernel. I don’t have that kernel installed right now as I started trying earlier versions of kernels to attempt to get it working (with no avail). I’ll go ahead and install 5.15 again and test / rerun nvidia-bug-report.sh as root. I’ll post here again later this evening.

You can’t just wildly install any kernel images, the headers have to be compatible so the nvidia driver can be compiled. Please use the liquorix ppa to get a new kernel and a working nvidia driver.

Ok, I have add the liquorix ppa:

I have the NVIDIA ppa:

Here what I get when I run:

In the NVIDIA settings popup, under PRIME Profiles, I have selected: “NVIDIA (Performance Mode)”

After this, I ran these commands but it didn’t change any of the NVIDIA Settings messages above:

The nvidia gpu fails to initialize:

at the same time, the TB controller and other devices are freaking out

Please check for a bios update.

I found this thread discussing issues with external monitor due to bios issue.

Razer released BIOS 1.09 which fixes the issue of not having DisplayPort out over the dGPU using the Thunderbolt 4 USB-C ports. External monitors only worked through the iGPU and framerates took a hit. 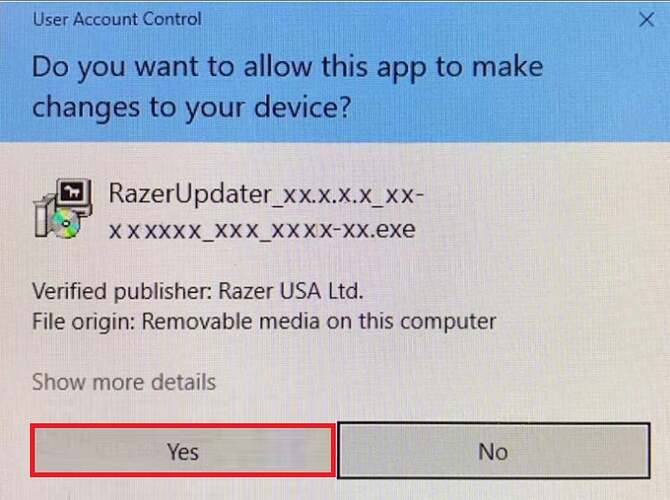 Unfortunately, I can’t seem to find the bios for this laptop without using their BIOS Updater which is only Windows compatible.

NOTE: I went into the bios to see if there was an option to check for updates, and there was not one. I will have to find the new version of the bios online and manually flash the bios.

Just posting this here as others may find this helpful later. I’ll keep looking.

Found the same. Trying to dig deeper, it seems Razer doesn’t release firmware images and only allows updating through their Windows-only “BIOS Updater” application.
So you’ll either have to install windows or create a windows pe usb boot stick.
https://superuser.com/questions/1518167/create-a-bootable-usb-of-windows-pe-on-linux

I’m allergic to Windows, so I will go with the Windows PE bootable USB stick. :)

Ok, I created a boot thumb drive (Hiren’s BootCD PE x64 (v1.0.2)) and was able to boot into Windows PE successfully. I downloaded the latest Razer Blad Bios Updater and placed it on a USB drive and ran it. I got a device error when running the bios updater file. The error looks related to a driver issue.

Does the notebook have an ethernet port? Maybe those drivers are included in the WinPE image.

The laptop doesn’t have an ethernet port, which is fine. My access to the internet is not the issue. I’m going to load a Windows ISO that is newer and hopefully it can run this Bios Updater exe file.