NB: I am posting this in the Orin AGX Forum because that is my primary target device, but I am also seeing this problem with a Xavier NX dev kit. Both devices are running the stock JetPack 5.0.2 Ubuntu release.

I am running into an issue with USB-serial devices, whereby sometimes no data are available to read. Simply retrying one or more times will succeed - there is no need to reboot the Jetson machine or re-plug the USB device.

The device is configured using stty -F /dev/ttyUSB0 raw ispeed 115200 ospeed 115200. Using cat /dev/ttyUSB0 will either return a continual stream of bytes as expected, or it will just block indefinitely with zero bytes returned. If there are zero bytes, there is nothing new present in the kernel logs. If we do receive bytes, that stream will continue as long as long as the device is generating bytes - the connection seems reliable once it has started. There don’t seem to be issues with device enumeration either - it is consistently present the whole time.

I did some investigation where I redirected /dev/random on my host laptop (running Ubuntu 20) to a USB-serial device, and then attempted to read from it on a Xavier 200 times in a loop, tracking how many times it actually received bytes. I tried different baud rates and there seems to be a direct negative correlation of performance with baud rate, as the attached graph shows. 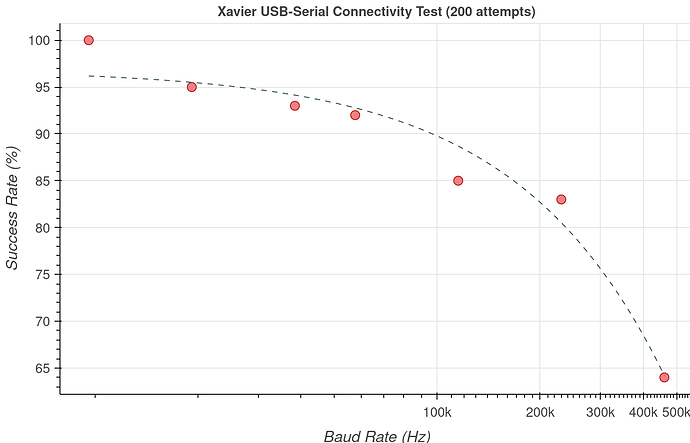 Please could someone from NVidia try and replicate these findings and offer a solution?

TTY device usable only once after being connected on the Jetson AGX Orin
linuxdev January 16, 2023, 7:11pm #2

I don’t have a real solution for you, but is it possible to produce that same chart when using two stop bits? I’m thinking reliability would go up, but not all hardware can use two stop bits.

Hi,
This looks to be duplicate of
Serial port less reliable after upgrade to 35.1, continuation

We are checking it. Will update once there is further finding.

@DaneLLL I would say they are definitely related, but that involves UART directly, whereas this is USB, and specifically appears to be something around usbserialgiven that cdc_acm seems to be okay?

I have repeated this testing with the Xavier NX flashed to JetPack 4.6, and I do not have any issues with the USB-Serial connection. To me, this strongly points to it being an issue with Kernel 5.

Hello, I’m posting here as my thread is now locked, by curiosity I have also performed the same tests than in Serial port less reliable after upgrade to 35.1, continuation on the latest Jetpack 5.1, there is no improvement regarding the serial port performance.

Hi,
Please check if you can replicate the issue on Orin developer kit. If yes, please share the steps so that we can set up and try.