I’m having an issue with DOOM 2016 on an optimus system, where OpenGL renderer performs at about 100 fps, while the Vulkan renderer struggles to maintain 60 fps. I have played the game on this same machine at 160 fps using the vulkan renderer in the past, so I’m assuming this is a driver regression.

I have filed a bug 3879254 internally for tracking purpose.
Shall try to reproduce issue locally which will help to debug the issue.

After further investigation, it looks like the something is spamming syscalls. Output of perf top attached. 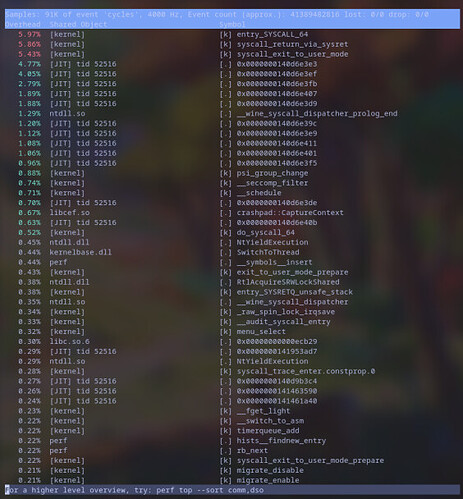 This doesn’t happen when running a different game, like say Tetris Effect Connected: 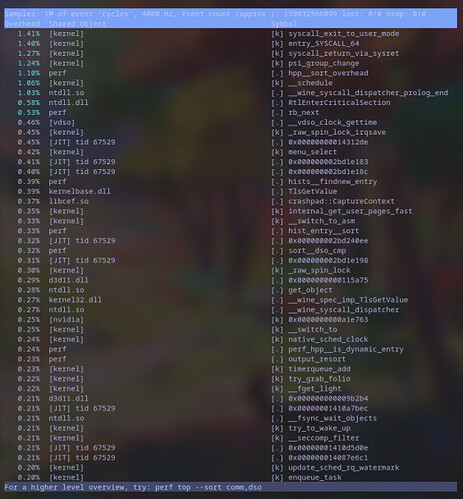 I tried on couple of notebooks but could not reproduce issue so far.
Can you please confirm older driver version where it worked properly and share repro / no repro video for better understanding.
Also specify which campaign you played and observed issue.

I tried downgrading to the 495 driver, but dkms is failing on kernel 6.0.10. I’ll test it better with a kernel+driver downgrade after the 6th of december, as I have exams ongoing at the moment

While messing around, I noticed that Powermizer being set to “Adaptive” wasn’t ramping up my GPU fans. I exited the game, set powermizer to “Prefer Maximum Performance”, and tried launching, and the performance problem was solved and persistent across multiple launches and reboots.

I’d attach a video but using nvenc to encode the recording is making the GPU ramp up, making the bug not-reproducible. Software/CPU encoding will also affect game performance

Hi
While I’d love to test, I don’t have the game installed anymore and my current internet is too slow to install it in a reasonable time frame. I will test the first instance I can (approximately a month or two from now) and get back