Livestream with multi GPU does only use one GPU for encoding?

we are currently working on maximizing the concurrent streaming sessions per render server for our solution.

At the moment we have one render server with two A40s. But when we start multiple sessions with streaming enabled we cannot use more than 6 concurrent sessions. What is interesting is, the fact that (measured with VNME) only one GPU has “encoder utilization”. Even if we disable multiGPU and assign the GPUs round ribbon to the processes, this does not change… only one GPU is used for encoding.

Here is a screenshot from the Web-UI we´ve build for our render servers (values are fetched with NVME): 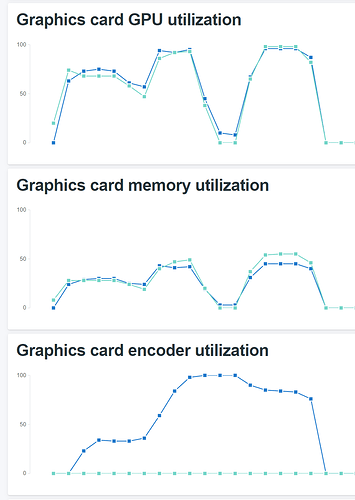 Here you can see, that both GPUs have load (because we have assigned the GPUs even to the processes. But only one GPU has encoder utilization.

Is there any way to specify which GPU should be used for encoding?

Is there any way to load off the encoding work to an other hardware component (specialized encoding card or something like that), that would allow us to squeeze out more rendering sessions per GPU by reducing its load?

Thanks for your advice

Open OM-77422 for this, but asked the dev team to look at this together with Very high GPU load when enabling WebRTC - #9 by c.bickmeier

any news about this? Ist there any way to get updates about those OM-tickets?

Following-up on here is the best course of action. It’s up to the dev team to schedule and prioritize these kinds of things. I’ve pinged the issue to see if we can get an update.