Writing an interactive application, we had very disturbing (long) stutterings.

Trying to analyze the problem, we wrote a very minimal OpenGL application, using win32 API to setup context and vsync, and then looping on glClear() with a rotating color.
Build instructions are provided in the repository.

All the code is in this single file.

We ran this minimal example in Nsight Systems on several systems:

Also interestingly, these blocking calls always seem to occur around 2 seconds and 28 seconds, on both Nvidia systems.

What could cause such stuttering?
How can we address the issue when running on Geforce GPUs?

We will be happy to provide any further information which could be of help.

Here is a screenshot of Nsight timeline: 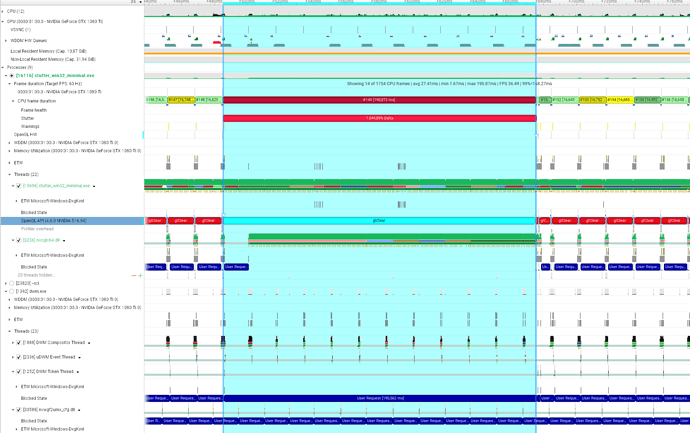 Any particular reason why you opened a new topic instead of trying to ping for again on your original post?

Regarding NVIDIA feedback I have opened an internal bug for this, but I did not receive new information on it. I am not an OpenGL expert, so I cannot say if this is connected to your code or to WGL or something else.

This does not seem to be a general problem since we did not receive any other complains about this. Which I would expect if it would be a widely observed issue.

So unless there is some community insight, I would ask for a bit more patience.

Thank you @MarkusHoHo for this feedback!

I finally decided to open a new ticket because, at the time of the original post, I thought I was facing a “gltf-specific” issue (as reflected by the title). As it turned out during the discussion that it was actually another problem, I thought it would be less confusing to have a new separate issue.

And thank you for opening a bug. Is there a way for the public to track the advancement of this ticket?

Our ticketing system is only visible to corporate customers or development studios I am afraid. But if there is some insight I will post it here.

We ran this minimal example in Nsight Systems on several systems:
…

Also interestingly, these blocking calls always seem to occur around 2 seconds and 28 seconds, on both Nvidia systems.
…
How can we address the issue when running on Geforce GPUs?

Must have YES for 1st 3 to get Flip presentation mode (bypassing as much DWM overhead/latency as possible, without needing hacks to achieve this). Also if multiple monitors, make sure the refresh rate is set the same on both.

Related to your issue here and what’s described there for your glClear() observations (see link below):

When glClear() is blocking at 100% cpu usage in the application process, but is actually divided in several “usage” blocks (which migrate CPU, and can be individually selected). These blocks seems to align with “Blocked states” ranges in an nvwgf2umx_cfg.dll thread of the dwm.exe process.

When setting the clear color each frame with glClearBufferfv() before the call to glClear(), this first call is blocking.

The blocking seems somehow synchronized with some blocked state on the DWM token thread of dwm.exe.

DWM fits. Related to this, what I can tell you (you can determine this with Nsight Systems) is that after queuing SwapBuffers(), the first write to the new window swap chain image (e.g. glClear(), glClearBufferfv(), etc.) is what forces the back-end driver to wait until it has obtained a swap chain image to render the next frame into. This is where DWM and the display system can introduce some back-pressure on the render pipeline (since it provides the swap chain image), slowing it up to the display rate when VSync is enabled. The glFinish() added after SwapBuffer() + glClear() just flows that backpressure to your CPU draw submission thread, for debugging/profiling purposes, so you can observe it easily. It also keeps the driver from queuing ahead (again for debugging/profiling purposes), so that the driver doesn’t queue up multiple frames of work and then block you for many frames while it and the GPU “catches up” to all that work you just queued.