Not able to install anything because of the following error...need help

I was trying to install zeroconf when I first faced this error.
I tried installing the uvcvideo module but it seems that it should already be included,
anyway the procedure mentioned Linux UVC driver & tools didn;t help either.

I have tried a couple of things like editing the status file or removing the sources list based on
some ask ubuntu questions but in vain.

It appears that you have multiple errors. If you are trying to install an Intel RealSense camera, you will need to separately compile the uvcvideo module to include the video modes needed by the RealSense camera and librealsense. There is a set of directions on how to do that here: 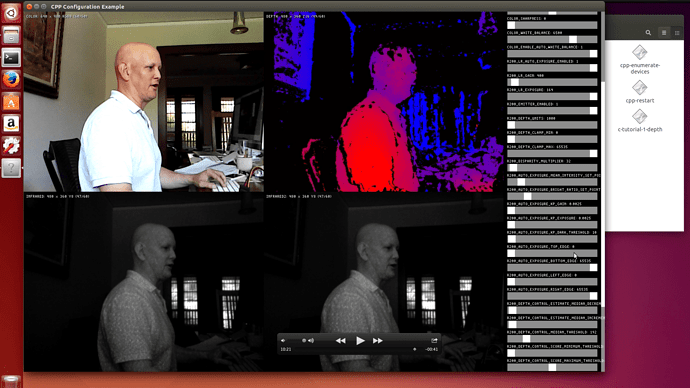 Installation of the Intel RealSense Cameras on the Jetson TK1 is made possible by the use of the open source library librealsense. Looky here: Background Note: This article is intended for intermediate users who are comfortable (or want to be) with...

Installing librealsense in ROS for the TK1 is covered here: 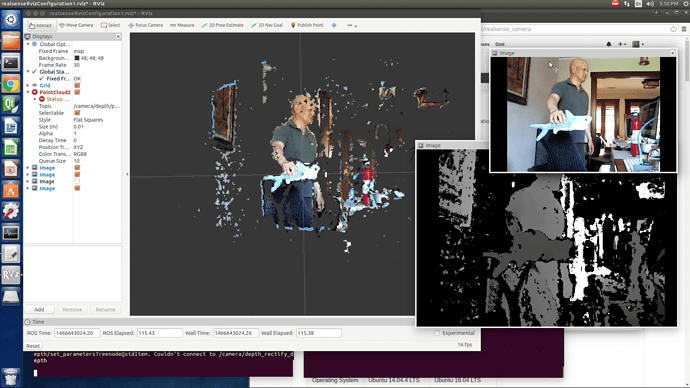 In this article, we cover ROS installation of the Intel RealSense Camera on the NVIDIA Jetson TK1. Note: This article was updated 9-9-16. Looky here: Background Note: This article is intended for intermediate to advanced users who are familiar with...

I followed the instructions in the first link and got the errors as follows:

Please let me know how where I went wrong or how to proceed further.

What local version number did you use to build the kernel?
Which version of L4T are you using?
Where did the failure occur?

Thanks for the quick replies.

The local version number is the same as the one mentioned in the link.
The version of L4T is L4t R21.4.

The failure occurred when I tried to install guake in the system.

Also I am currently facing another issue where post the login screen, nothing shows up via
the hdmi connection and I have only the power led on whereas I remember there is another blinking
light which doesn;t turn up anymore.

You are suffering from several issues. It’s not clear what steps you have taken to get to the state where you are now. The errors listed in post #3 suggest that when the kernel was being built, the buildKernel.sh step failed or did not execute as none of the modules are in their expected place.

The part of the script referenced is:

A contributing issue could be that you may have run out of room on the device during the build. The eMMC fills up pretty quick when installing a lot of packages. It’s generally recommended to build a base kernel on as clean of an installation as possible, and then add packages later.

There are several ways to go about fixing it, but the easiest is to reflash the Jetson and start from a known state.

If you decide to build a special purpose kernel for the RealSense or other peripheral support, you should build the new kernel and install it immediately after flashing the Jetson, and before installing other packages. After the build, reboot and make sure that you have a working system before you attempt to install other packages, which means that the monitor, keyboards and peripherals should work before you start adding more.

The error messages that you posted in post #3 appear to state that the kernel was not built correctly (the module files were missing). If you build a new kernel and it doesn’t boot correctly, that indicates something be wrong.

As an added note, make sure that you are building from a “fresh” install of a kernel, or one from a known state. You want to make sure that the kernel source and configuration matches. Some people try to build on a modified kernel (such as the Grinch kernel) and forget to grab the matching kernel source and configuration file changes. That’s why it’s important to check the local version using ‘uname’ to check to make sure which version of the OS is being used. If the configuration and the sources don’t match, we can guess that bad things happen soon there after. If you build a custom kernel, you probably will want to rename the local version so that you know it is different than stock. This also makes it easier to know if the newly created kernel has been loaded, as the “uname -r” will return the new kernel name.

I’ll also note that after you get everything working the way you want with all the installs done, you may want to make a clone of the disk image to save on your host so you don’t have to recreate everything when something goes wrong.

Thanks for the reply and the amazing post at Install LT4 21.1 on Jetson TK1 · GitHub.
I followed it to reflash the jetson to a known state. I will now be proceeding with the step 2 that you have mentioned i.e. building a kernel for the RealSense camera as it is part of the project.

As for the cloning part, I would like to know is there is a way to clone one image from a jetson and flash another jetson with that image (as I have access to another one where I was able to install everything else without any problems) without using clonezilla or dd?

Thanks for all the help that you have provided.

Note that the Github gist installs L4T 21.1, I believe the current version as of this writing is 21.5.

JetsonHacks article (a little old, you’ll have to adjust for your situation) 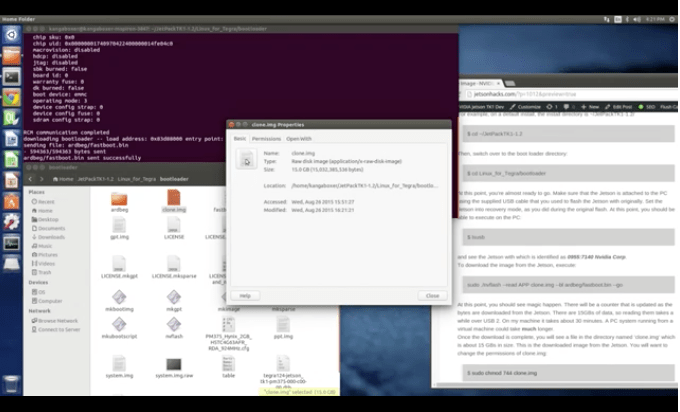 In many cases there is a large amount of work that goes into creating a working Jetson development system. This can include such things as loading drivers, compiling source files and libraries, system configuration, and so on. During development,...

If you intend to restore on a different board, delete the file :

on your board before shutting down and making the image.
Otherwise, the ethernet controller on the new board will not match the MAC address in this file, it will be accessible as eth1 instead of eth0, and NetworkManager may not like this.
This file will be automatically recreated at first boot.

Kangalow, I am having the same “Errors were encountered while processing…” error messages that the original poster was asking about. But since I am not using the RealSense camera can I safely ignore them? I get that error message whenever I try to install any ROS package, but it seems that they get installed correctly (at least the ones I have tried so far, such as the standard turtlebot packages).