but when i am trying to find using,
3. nvidia-smi: is giving me this:

NVIDIA-SMI has failed because it couldn’t communicate with the NVIDIA driver. Make sure that the latest NVIDIA driver is installed and running

4. sudo nvidia-settings showing me this: 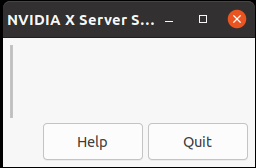 ERROR: NVIDIA driver is not loaded

ERROR: Unable to load info from any available system

You installed an incompatible kernel from mainline. Please either return to the 20.04 stock kernel or use the liquorix ppa to get a newer working one.

Would you be able to share how you figured this out from the bug report log? Or it the uname output already indication enough? (v510 should support 5.17 kernel as far as I am aware)
I would really appreciate it if you could let us know so others can benefit from your finding as well.
Because it seems especially with Ubuntu 20.04 kernel incompatibilities are getting more common, for example in this post in the Gaming & Visualization forums.

Thank you in advance!

Mainline kernels are are built on the current latest Ubuntu version at build time.
While the kernel images itself are interchangeable, the problem is that the generic headers needed for building modules of later kernels introduced a dependency on a minimal glibc version, which mostly differ on the Ubuntu versions. Additionally, kernel 5.17 introduced new cpu vulnerability mitigation which requires a new gcc version when enabled not existing on older Ubuntu versions.

2 Likes
NVIDIA-SMI has failed because it couldn't communicate with the NVIDIA driver. Make sure that the latest NVIDIA driver is installed and running.
MarkusHoHo May 20, 2022, 1:18pm #5

Thank you very much for the clarification!

@generix Thanks for pointing out the problem. I installed the liquorix ppa kernel for 20.04 and now the nvidia driver is working.