Using “OpenGL Extensions Viewer” benchmark to check my Nvidia capabilities it shows that OpenGL 4.x versions are not compatible. The same test with my integrated GPU Intel all tests passes. I have updated my Nvidia drivers to 516.94. Anything else to check or is there a problem with Nvidia? 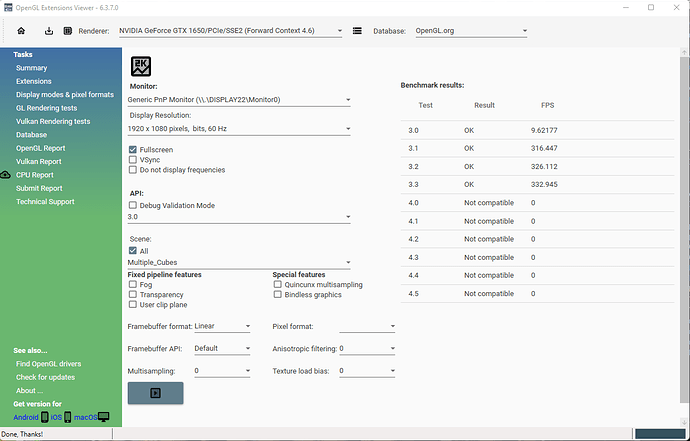 Double-check with the demos in GPU Caps Viewer

Meanwhile i heard people have similar issues after installing the Microsoft OpenCL and OpenGL Compatibility Pack
This pack has actually that OpenGL 3.3 limit.

So if you had installed that pack, uninstall it and try again.

Hi StefanG3D,
I’m sorry I missed your previous message.
There is no “code 43” in my Device Manager.
All demos in “GPU Caps Viewer” ran fine, except the “CL CPU” ones.
I don’t have “Microsoft OpenCL and OpenGL Compatibility Pack” installed.
I tested the benchmarking again, but it is the same thing. Single “Cube” runs fine, “Multiple Cubes” only up to 3.3. Single “Iron_Fist_Boxing_King” runs fine, multiple “Iron_Fist_Boxing_Kings” only up to 3.3.

I would like to add that the “OpenGL Extensions Viewer” doesn’t allow me to select Nvidia as Renderer by default. I have to open “Nvidia Control Panel” and change in “Global Settings” the “Preferred graphics processor” from “Auto-select” to “High-performance NVIDIA processor”, only then I can open “OpenGL Extensions Viewer” and select Nvidia as Renderer.