Dear nvidea Team and folks from the comunity,

I am trying to implement a2f as part of my production pipline for my current job. First of all: great Programm, thx 4 making this possible. Even if everything works great for me so far and i am really impressed by the results, there are a view issues in the process, that i dont really understand and they slowing me down.

I am using the Blender branch thats provided by omniverse for the export ( its so handy <3). The export is as easy as i t should be, as long i exporting only the mesh of my character. The first questions Starting with the import in a2f:

1: Is there a possibillity to export the model with the correct Axis. Its no dealbreaker, for sure but would be nice, if i dont have to set it up in a2f

2: When i seted up the axes, i prepare the character setup. Mostly i am just using the bodymesh for the skin, without any aditional meshes, to keep it as simple as possible. But when i press “Setup Character”, both of the mark meshes appear somewhere faaaar away from my mesh. As i found out i can jump to them in viewport by pressing “F” i found them. And its a pain to get them in the right position for every of my models. Is there a way to prefent that? Or is there a smarter way, to get them at least closer to my mesh? 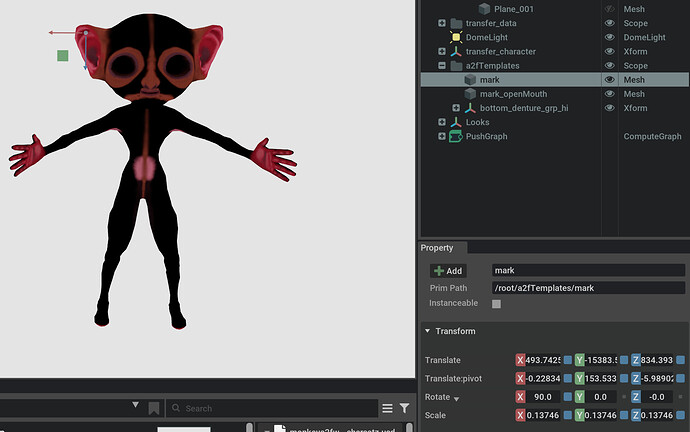 image1950×1222 195 KB
as you can see in the picture my mark is somwhere in the background, and his coordinates are telling this as well. 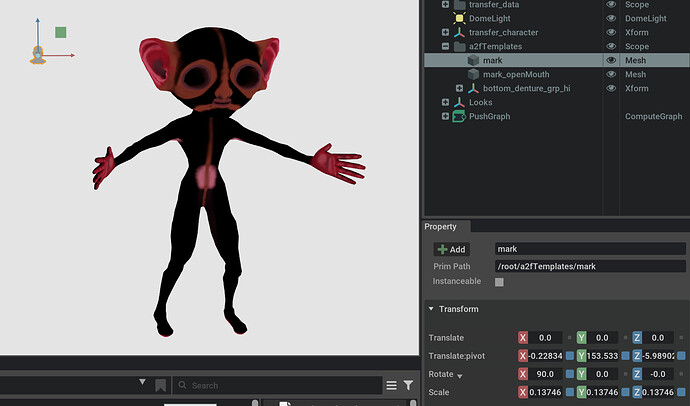 image1972×1161 181 KB
when i set all the position transforms to 0 i can at least see mark, but he is still far in the background.
I also dont understand, why my character is on a total different spot then the mark meshes if i set their cordinates to 0/0/0…

Apart from that i am geting scarted to death everytime after my mesh fitting, 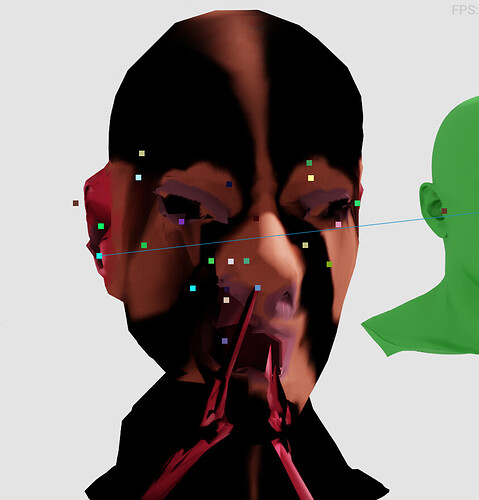 3: Sometimes it hapens, that the fingers for example are moving with the face. I have no clue so far where this comes from, but is there a way of dealing with this?

4:I didnt know what to expect as i tried to export it back to blender, but it was much easier then i thought.even if i was lucky and found a solution, i dont really understand that good whats happening. Pls tell me, if there is a better workflow, putting it back into blender then mine. For me it worked the best so far with an export of an Geometry USD Cache. i choose rigid xform as keys ( even if i dont know what that means^^??) because geo cach messing up the transforms if i open it up in blender. The first time i was successfull with it i used the import USD funktion of the omniverse belnder branch. Later on i discovered that i can load in every blender build the usd file into a meshsequence modifier (never worked with this before) and it works fine.

5: So far my last question is how to deal with corupted files. I know in produktion, there is only one answer: Backups! But as i tested it happend multiple times that i wasnt able to open the whole blender project (many different ones) as well as the a2f projects. Is there any recomendation from you?

I really apreciate your product, and i will be happy for any helping hand.

Hello @vals.mega! I’ve asked someone from the Audio2Face team to help you with your character setup questions!

I will inform the dev team about the export Axis so what we can make the transition between Blender and A2F smoother!

For the corrupted files, or the files you weren’t able to open, could you zip those up and send them to me? I want to have the development team take a look at them so that we can make improvements on our end. You can attach them here or send them to me by email here: omniversecommunity@nvidia-omniverse.atlassian.net

A feature request ticket was generated from this post. OM-71793: Correct Axis on Export from Blender to A2F

your responsivness is awesome, thx for the fast answer.

Unfortunately i deleted all corupted files or “fixed” them by myself, except for 2, and i think i kwow whats the issue with one of theses.
monkeya2fworkflowcrashersatz.usd (21.7 MB)

I reexported the usd from blender and override the old one, while a2f was opend. As i was reopend the file in a2f it crashes.

much more interessting for me is this one:

As soon as i reimportertet the USD file back to blender , i wasnt able to open it up in the omniverse blender branch or blender 3.2.2 (what i currently use) after i rebooted my pc.
What i meant by “fixing it myself” was, that i tried to open the file with older blender versions, and for some reason i was able to do so in Blender 3.0.1.
when i opend the file in 3.0.1 i recognized, that the mesh wasnt deforming anymore like it should. The reason was here:

image2434×824 128 KB
as you can see in the red Field, blender doesnt found my _result. I can “Fix it” by deleting all my mesh sequence modifiers, and transfer my character to a new blender project. When i click open in a new mesh sequence modifier, for some reason in the field below (look at the picture below) stands .abc and my usd files doesnt show up if i navigate to their locations. 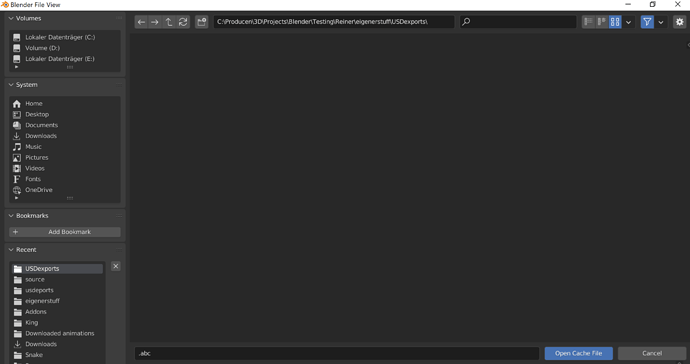 But: when i type directly the file name of my usd and press enter it wont show up at first but later in the modifier it does: 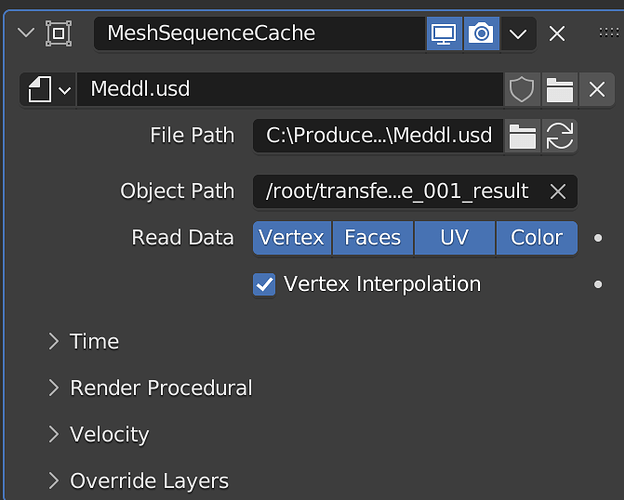 and from there on everything works like expected, just sometimes the mesh sequencer loses his files again and i have to convert everything to a new blender file.

Also i was wondering myself, why the filesize of the from a2f exportet is that big sometimes. I have something like 400 mb as you can see, for a 35 second long sequence. Is this normal? is there some way to reduce the filesize?

Any news with my questions? :)

I thought a video reply would be a better help: