I want to use a BasisCurves prim to define a path for a camera movement, using an action graph.
I drag the curve into the graph, selecting ‘Read Prim into Bundle’. The output of that node is an ‘outputs prim bundle’, which I feed into a ‘Point on Curve’ node. I get the U Value for the node from the playback time, divided by 60.0. Unfortunately, the point on curve node does not seem to work well with the bundle, logging

The same concept seems to work when I get the curve bundle from a ‘Transforms to Curve’ node, as described in this Nvidia talk: Action Graph and USD Curves Extension Overview in Omniverse Create - YouTube

My understanding is a Bundle is a collection of Prims, so, would’nt you have to ‘pick’ a Prim out of the Bundle before connecting to Points On a Curve node?

Interesting. Do you know how I could pick a prim using any kind of existing node?

Apart from that, the input to the point on curve node is again a bundle, they call it ‘curve bundle’.

Thanks for the reply!

Seems like those curve nodes will only work by starting with Xforms, but let me confirm with the devs.

So you actually need to use “Import USD prim data” node for this: 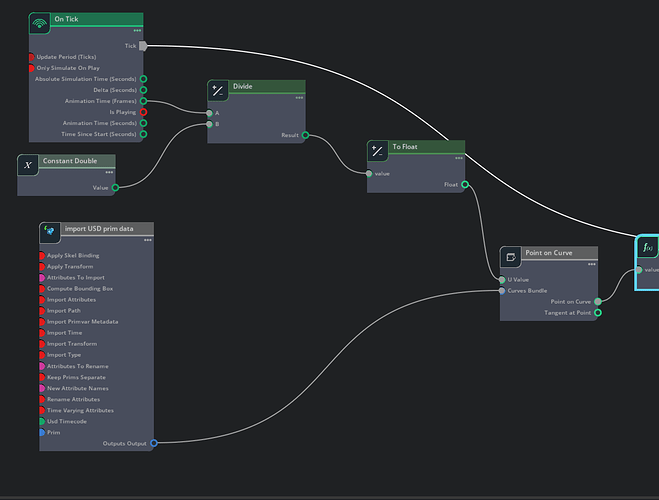