Manipulating the Retarget Pose to fix collision issues with CC4 Characters and Audio2Gesture causes fingers to be misaligned. 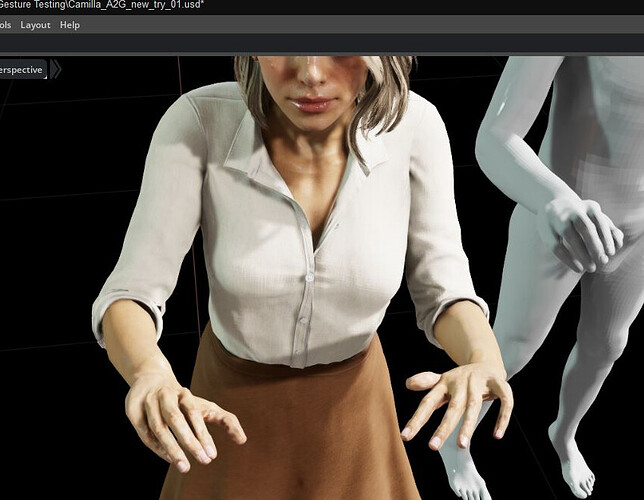 Video here shows steps taken that were needed to retarget pose to prevent collisions as well as repositioning the shoulders. The default retarget made the shoulders more upright and pulled back, making the character to appear tense. The retarget pose adjustments fixed these issues but after multiple changes the fingers appeared to get more misaligned.

Also, below are the values for all the adjustments made for the retarget pose to prevent collisions and to relax the shoulder appearance. Is there a way to script this, so that I wouldn’t have to do all these adjustments manually for every single character?

Hello @tsaguindel! Thanks for letting us know about these adjustments! I’ve informed the team to make updates to their tutorial. I’ve also asked the devs if there is a way to script this so that it can be applied to all of your characters. I’ll post back when I have more information for you!

Thanks for your reply. I didn’t make any adjustments to the fingers. I’ve gone through multiple iterations of this and found the best were as I listed above. However, even then, the result of the fingers were not equivalent to the A2G base mesh. I’m guessing there is nothing that can be done to fix this but if there is something that can be done to prevent collisions and the awkward shoulders from the default retargeting, then no adjustments would be needed in the first place.

P.S. - Can you provide a little guidance on where to start if I wanted to script the adjustments that I listed above? I presume this can be done in python, but what would be the module or function names that might be used to do that?

Looking for an update from Nvidia / Reallusion to fix these issues :)
However, @tsaguindel the solution you have shown above with all details, works pretty well!!

Everybody, see it in action here:

And here we see this fix / tweak in use with A2face:

Hi! Here you see how A2F & A2Gesture on CC4 works together in Machinima: [a2f a2g combined cc4 in Machinima] It works just perfectly! We have in use here the fix for Camilla ( or any other cc ) skeleton for “over tension” looking pose. You can see the fix here, made by Ted Saguindel: https://forums.developer.nvidia.com/t/animation-retargeting-retarget-pose-with-audio2gesture-and-cc4-characters/233695/2 But now I wonder, could I do this combining at the same machinima project that…