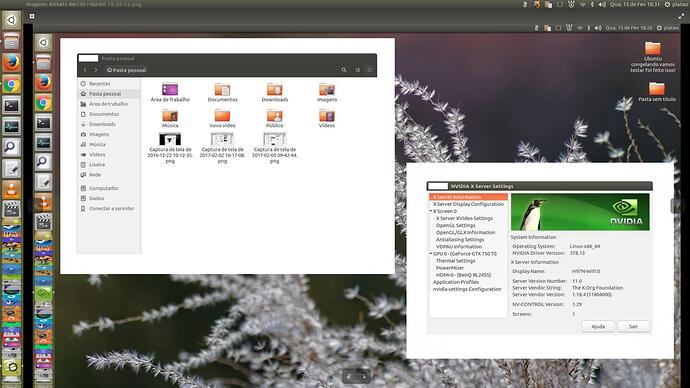 I corrected the title.

Same problem with 375.39 long live branch. But when you log out and login. It fixed. Im using canonical offical ppa.

When is this issue going to be fixed?

Hello,
I have already discussed with customer support desk people. I am advised to post the report. I don’t know when they will look into this issue as this is really irritating and frustrating to see weird color strips around the windows while clicking right option or typing anything in browser address bar. This weird color strips is disappeared every time when I restart my system and again appeared after some time. I don’t know when they are planning to fix it. Even though it is not beta version, why is there so much issue across every systems ? I hope they will come up with a permanent solution as early as possible. Just sake of completion, I am mentioning my system configuration that I am using GeForce 840M and Ubuntu 16.04 LTS. I tried with 375.26 without PPA, although there is no issue like this, but problem is , cuda8.0 is not installed into the system. So I had to remove 375.26 and again installed 375.39 for CUDA. 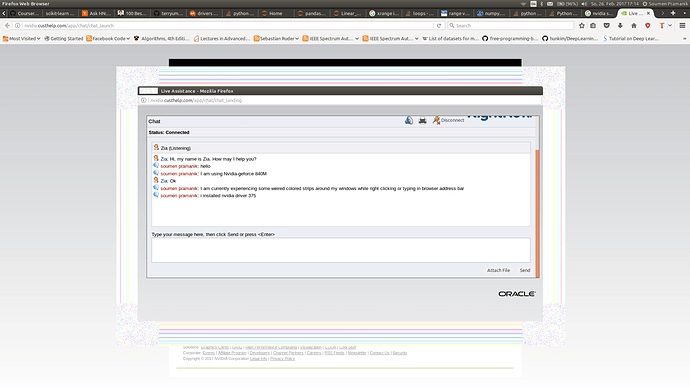 I have the same issue using this driver 375.39 (which I need to) with Ubuntu 16.04 LTS. This bad window border problem occurs with using the upgraded driver from ppa Bug #1667158 “Regression: Borders of windows and desktop backgro...” : Bugs : nvidia-graphics-drivers-375 package : Ubuntu and NVIDIA-Linux-x86_64-375.39.run (NVIDIA’s graphic driver installation file). Can NVIDIA give a timeline to when this bug can be addressed by?

How does one raise this bug issue to NVIDA if not through this form? Can someone advice me?

It’s always hard to say for sure with this kind of corruption bug, but there’s a good chance this is caused by the same issue I looked at recently. If that’s the case, then it should be fixed in the next release. Please let me know if it’s not.

I didn’t know which issue you are talking about. But the issue is really irritating as I am not able to close any window because of the strange color strips around the window. Could you please look into this bug and try to fix it as early as possible as it is already reported long time back? But it is yet to be fixed. I have already attached the issue in my previous response. So you can check the attachment to know if this issue is matched with the issue which you are talking about.

I have already contacted nvidia support guy whom I gave NVIDIA-BUG Report log but I am still waiting for any response.

Your immediate action is highly expected.

N.B: I have attached current NVIDIA Bug log report for your investigation.

I’ve seen the corrupted-memory borders as in the top post occasionally in the past, but with drivers 378.13 and 375.39 I reproducibly get a solid white border 100% of the time after resuming from a suspend to disk or RAM. Reverting to 367.57 or earlier clears the issue but brings back other bugs.

My system is a GTX 1060 running Ubuntu 16.10 and X.org 1.18.4. I get the same behavior whether the drivers are installed via Ubuntu’s nvidia-375/nvidia-378 packages or manually from NVidia’s .run installers. I measured the borders in screenshots and found them to have widths and heights in pixels that were usually close to but not exactly 64 (e.g. 55x59 here, 63x70 there).

Again, this never happens between a reboot and the first suspend, but always happens after resuming from suspend.

The Nvidia 370.28 not have this issue, work fine after resume…

Tried this solution on my Ubuntu 16.04 system and it removes the bad borders caused by driver 375.39 after the system wakes from suspend/hibernation.

Something to help manage the situation until Nvidia issues a more permanent fix for 375.39.

I am running ubuntu 16.04 and have driver 378.13 installed and I am having an issue. I know this is already known, but figured I would add to this since my laptop is running the GeForce 740M.

Any word as to when a fix will be released?

This workarround fix for me!

@experimancer Thank you for sharing. Given that simply killing compiz process fixes the bad border problem, I have tested a solution that works on my Ubuntu 16.04 system every time after the system wakes. 2 steps solution. Hope it can help...

@experimancer Thank you for sharing.

Given that simply killing compiz process fixes the bad border problem, I have tested a solution that works on my Ubuntu 16.04 system every time after the system wakes. 2 steps solution. Hope it can help others.

I created a script called “fixbadborders” in the directory /lib/systemd/system-sleep.
It contained the following:
#!/bin/sh

Purpose: Kill compiz after system wakes up from sleep.

This will fix bad window borders caused by Nvidia driver 375.39.

Allowed the script to have executable permission with:
sudo chmod +x fixbadborders

375.39 is unusable after a resume from suspend.

Distorted window ornaments followed by the system becoming unstable and going away.

Can confirm 370.28 works for me. Also fixed my issue with hibernate crashing.

Tried this solution on my Ubuntu 16.04 system and it removes the bad borders caused by driver 375.39 after the system wakes from suspend/hibernation.

Something to help manage the situation until Nvidia issues a more permanent fix for 375.39.

Can confirm 370.28 works for me. Also fixed my issue with hibernate crashing.

This vesiom nao have this problem, only 378 and 375 versions crash after suspend…