Remote access connects to a virtual Xserver running on software.
The real Xserver doesn’t run at all but is continuously crashing due to the 12th gen intel igpu still being active and the kernel being too old.

Thanks for your reply,

I tried installing the Kernel 5.17.15 and installed it. But the headers for 5.17.15 didn’t get installed giving some dependency error with libc6 and libssl3. Could you tell me what would be the right version of kernel that can be installed with nvidia-470 ? I also found a link from the forum but didn’t get much info : Ubuntu 18.04 cannot boot after installing recommended nvidia driver 470 - Graphics / Linux / Linux - NVIDIA Developer Forums .

Update: I tried installing liquonix but there also I have a dependency with libc6 version and libssl3 version. Is there any way to resolve this problem. I wonder how a user has instlled the liquonix kernel in the post: No display / NVIDIA-SMI has failed because it couldn't communicate with the NVIDIA driver - #2 by generix

Using the liquorix ppa is the correct way to upgrade the kernel. This also shouldn’t have any dependency on non-18.04 libc/libssl. Please remove the manually installed 5.17.15 kernel.

I have removed the manually installed linux and still I get the error as below: Please see the screenshot attached. There is only 1 kernel left and that is 5.4.0.131.generic.

The version of ubuntu is 18.04.06. Will it be better that I freshly install the ubuntu and then do it. 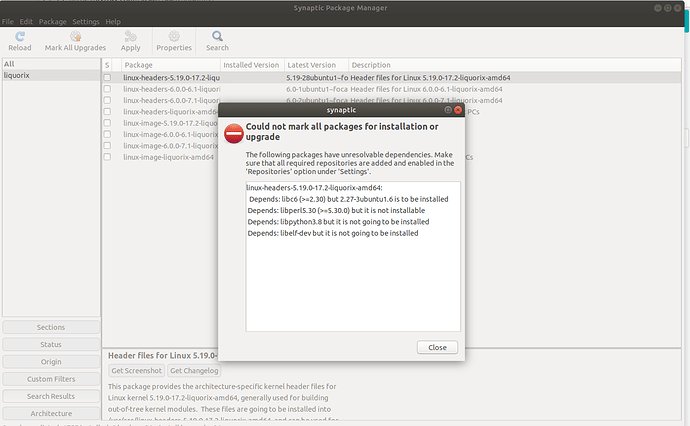 Thanks for your reply.
Is there any other way to make nvidia driver work for my configuration ?

You should disable the intel graphics in bios so the nvidia gpu is the only one.

I confirmed with liquorix that they have stopped supporting ubuntu 18.04.

Thanks for the support generix.