Hello,
We have the following hardware

The problem: We want to use the microphone connected to the i2s interface to record the sound. We got a “static noise” that doesn’t change. Check the .wav file attached.

What we tried to do:

Can someone give me a hint or some other ideas?
If you need other details let me know. Thanks in advance.

Thanks for taking effort in posting the issue along with necessary inputs.

Pinmux register values seem to be wrong. They should be as mentioned in Audio I2S on 40 Pin Connector - #54 by jonathanh. I would suggest to redo the pinmux changes as guided in link. Yes, Jetson-IO tool works for dev kit only.

No need to modify any amixer settings or other register rewrites. The default ones should work fine once the pinmux is set as desired.

Thanks for the answer, now I know where to look. I will try to modify the pinmux and I will come back with the result, regardless the output.

The results (recordings) were the same, and I’ve tried adjusting the mixer like in this comment [1], but there was no change in the output.

Maybe the problem is elsewhere. Do I have to activate somehow the i2s?

Could you probe the Jetson SCLK, FS and DATA lines while running the record and quote the behaviour.

SCLK should be operating at Fs*sample_width*channel_count while FS should be running at a frequency equal to sample rate. Also is the i2s mic independently verified with any other board to rule out that its not an issue with mic?

Unfortunately, I do not have the necessary tools for probing.

I don’t know if the mic was verified with any other board, but I think I’ll try that. Also, maybe I’ll try with the original carrier board and developer module.
I know that the mic is activated if the frequency is > 1kHz, else the mic is in sleep mode. I’ll check those frequencies.

And the output of this command, before the recording and when I was recording.
sudo grep “clock|extern1|i2s4|pll_a_out” /sys/kernel/debug/clk/clk_summary

While you verify the mic wit other boards, I see that i2s4 is not up in clk summary when you are recording which should not be the case.

Can you run aplay on i2s4 after making below connection

and chk clk_summary during the playback. This shall ensure that pinmux is taking effect (Ensure to set pinmux of I2S4 DOUT pin as well i.e all 4 pins of I2S4)

The result is the same as before, after running the commands, i2s4 is not up in clk summary during playback.

The I2s4 DOUT pin is not connected to anything on the board. But, I set the pin as output, reflash, but no change. I don’t think that DOUT is the problem.

I found though that there is something on I2S3 when recording. 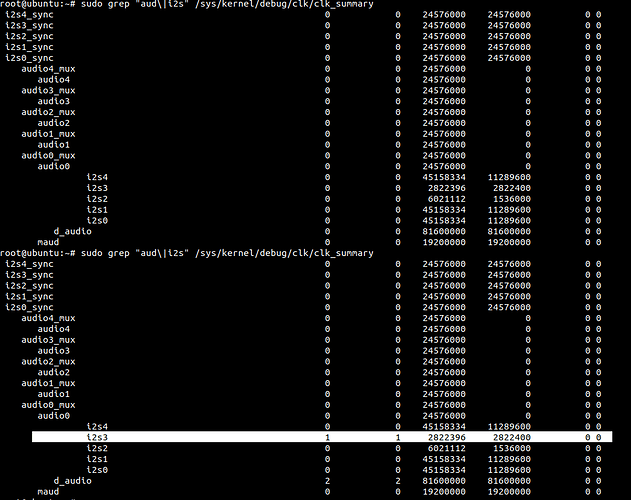 Looks like the i2s numbering in clk summary starts from 0. so i2s3 is the right entry to be looked at and its running at 2822400 which implies that you might have played 44100*2*32 (Fs * chan * sample width) wav file. so I2S bit clock form Jetson I2S is fine. Since FS is derived from this line, I suppose it will also be fine

If you had oscilloscope, could have probed data Line to see if data input from mic is noisy even when clocks are fine. So, you may need to check if there is no issue with mic with some other board when supplied with same power voltage and clocks

The issue has been reopened for sharing the resolution as requested by you in another communication.

After I checked the frequency of the mic from the documentation and saw that there was no problem with that, I connected the mic module to the pins of the devkit module. I enabled the i2s by using jetson-io.py and set the mixer controls as in this comment [1]. Then, I run the command for recording, and I got the same error (same buzzing sound). After that, I bought another i2s mic, connected it to the devkit pins, and tried again the command for recording. This time everything was ok, I succeded to record using the new mic.

When I saw that the new mic is working on the devkit module with the original carrier board, I’ve just connected the mic to my custom carrier board with the production module. The settings that are in the description of this post were ok. The pinmux changes that I’ve made were good. The i2s was enabled and I didn’t have to do anything else. Just modify the pinmux and flash the dtb/image to the jetson.

The problem was the mic module. After I replaced it, everything was fine.

Thanks for the help, and have a great week.