The machine does not use Wayland or XWindows, just plain text console.
I noticed that when it is booting, the console is scrolling normally.
But when it load the Nvidia Linux kernel module, the console is corrupted.

The machine is UEFI. If I am correct, the console is corrupted when it load the kernel, after this part:

I had blacklisted and not loading novueau. nvidia-drm.modeset=1 is set.
Finally, I do not have problem when using with Fedora 35, kernel 5.16 and previous Nvidia Linux graphic drivers. 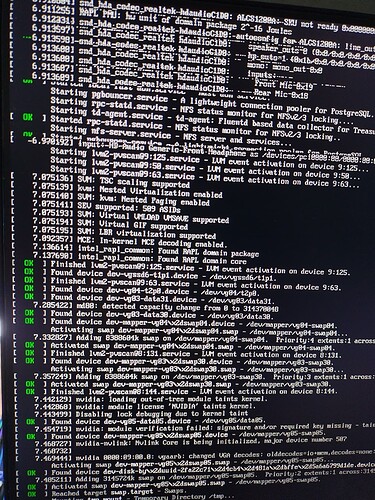 I do not have problem when using with Fedora 35, kernel 5.16 and previous Nvidia Linux graphic drivers.

There are quite a number of changed variables. Perhaps you might compare something more directly, e.g. Fedora 35+5.16+510.54 ?

Unfortunately I have upgraded the OS, and it shipped kernel 5.17rc5.
I have uninstalled the old Nvidia driver and install a newest version…

Please note I have added a screenshot to the beginning of the post.

@dungkaitai
Can you try once downgrading driver on Fedora 36 with kernel 5.17.0 rc5 and see if issue persists.

I don’t have the RC5 (pre-release kernel) now. So here’s the result:

Please note when using the nouveau build-in driver (all kernel version), the console does not have problem.

Just found out something:

About 2 years ago, the PC was not upgraded. The old motherboard use CSM mode. So I need to use nvidia-drm.modeset=1 for the KSM/X-Windows.

After the motherboard is replaced/upgraded and is UEFI. I kept on using the nvidia-drm.modeset=1 parameter for several Fedora release and Nvidia driver without problem.

I’m experiencing something very similar, so posting here in case I can provide some additional info that will end up helping OP as well.

I’m on Fedora 36 too. GDM starts fine and I can log in using either Wayland or Xorg, but I can’t switch to the Linux console (using e.g. Ctrl-Alt-F5 or F5). If I try to do so, I either get a blank screen (monitor says “No signal, entering sleep mode”), or, when I enable CSM in UEFI BIOS, weird glitchy graphics (just a straight, multi-color line across a black screen, really).

With nouveau, switching to the Linux console appears to work perfectly fine.

Let me know if I can provide additional information or try anything on my side to debug this!

FWIW, I got a new monitor – 4K unlike the previous one, which I was afraid might be a problem, but also with a more traditional aspect ratio of 16:9, whereas the previous one was ultrawide. And I can now access the Linux console even when using Nvidia drivers.