Hello, I would like to buy a Nano and start on this platform, however at the current prices, I realized it’s better to buy TX2 NX module with a nano development board ( price / performance )

To my surprise, I don’t find any help related to TX2 NX here or at nvidia pages, should I follow the tutorials / software as if I had a nano? I don’t have any clue where to start if I finally buy TX2NX

You should follow the tutorial for what module is.
The SDK manager/JetPack/flash tool should recoginze the module to flash the right SW.

Jetson developer kits are ideal for hands-on AI and robotics learning. We’ve got you covered from initial setup through advanced tutorials, and the Jetson developer community is ready to help. Professional Developers: Start here, but don’t miss the...

There is not mention to TX2NX , as example, I don’t know witch image should I download to wirte the sd card

FYI, the flash software is JetPack/SDK Manager. What actually gets flashed to the Jetson is “L4T” (which is Ubuntu with NVIDIA drivers). If you look up this URL it will tell you the most recent L4T which works with the TX2 NX:
https://developer.nvidia.com/linux-tegra

This in turn leads to a page with documentation and other links. The table will show which one to go to for the TX2 series. That in turn will show information about the SD card version versus the regular dev kit. A URL for looking directly at JetPack/SDKM releases is here (and it cross references the L4T release vesion):
https://developer.nvidia.com/embedded/jetpack-archive

FYI, you will end up flashing both the Jetson and the SD card model (there is boot content in QSPI memory of the module, plus the SD card…both have to be sufficiently close in release version). That’ll be the L4T R32.7.2 release here:
https://developer.nvidia.com/embedded/linux-tegra-r3272

Thank you for the detailed reply,
may be my fault but I’m still lost, as example going to JETPACK SDK 4.6.2 for TX2 NX series page , there is no sd image download for TX2 , in this case it is mandatory to have a computer with ubuntu to run the sdk manager?

Following the Nano Getting Started page it’s pretty clear, I wonder if there is something similar for TX2 NX

The TX2 does not have an NX version (a smaller form factor SD-card-only model). There is a dev kit which has an SD card slot, but this is different because it has eMMC memory (the SD card on these models is not used for rootfs). The NX SD card model (and anything NX) does not have eMMC and must use the SD card (the module still requires flash at times due to QSPI memory used during boot, but there is no rootfs/eMMC memory directly on any NX model). You should just flash the TX2 directly.

I don’t know for sure if the TX2 has any method to boot from SD card. It would depend on whether the bootloader software has an SD card driver. Possibly there is a way with initrd flash, but someone from NVIDIA would need to answer this.

I’m not sure I understand your comment but from your word I get that there no TX2 NX module, so what is that? 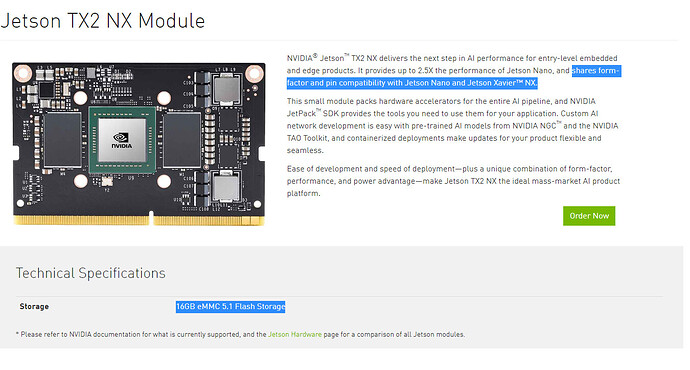 Hmm…I stand corrected. I guess I’ve only seen Nano and Xavier and Orin NX. I’m actually quite surprised I did not know this now that you point it out. I guess that means there is a web page error where the TX2 SD card is missing.

Could someone from NVIDIA comment on whether the 4.6.2 URL, missing an SD card version for the TX2, is a flaw in the web page?