Hi, I’m trying to flash a backup image to my Orin AGX dev kit but it stuck at the below step 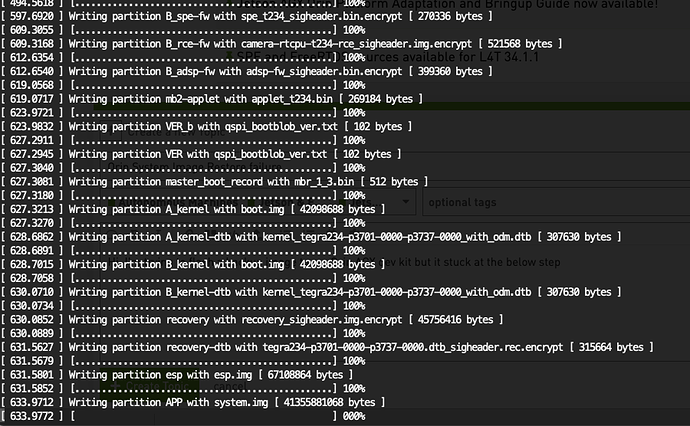 image900×556 128 KB
I have tried with different dev kit units and also backed up from different systems (raw + system with our own software) and they are all the same. Idk what’s the reason. Here are the steps I do backup and restore.

Worth to note, that if I use the same method to flash a raw image (BSP + rootfs downloaded from the official website), it can work. But even if I didn’t change anything, just back up that newly installed system. Then I reflash the system, I’ll get stuck too.

It will get stuck forever unless i force exit. after force exit, if i reboot the orin again, the system will be gone and it won’t boot up. then i have to reflash the original raw system again.

Here’s the step of my backup and restore

However, if I copy the system.img.backup back to system.img and reflash, it works again.

Do i need to also copy this raw into bootloader folder?

The size is valid. Either raw (the “.raw” file) or sparse (the one without “.raw”) works for flash if copied to system.img. The raw file is ignored if its name is not “system.img”, and it won’t matter which one you use. The sparse file is smaller and thus faster to flash. I just wanted to find out if the partition size was valid, and it is. Being stuck is for some other reason.

Is the clone from the same release which is being used to flash it? They should match, but I would think if this fails, then it would still flash and simply not boot correctly, so I doubt this is the problem (worth checking though).

Yes, it is. i specifially installed from that version and then directly backed up the image. The version must match.

Do you have an ETA for this new version? my project depends on this feature urgently. want to know if the we can make it by the time.

Should be this week.

The JetPack 5.0.2 GA release has been published, see JetPack SDK | NVIDIA Developer
Please help to open a new topic if still an issue.