Hi, I am using Jetson TX2 developer kit on my robocar, a picture is here 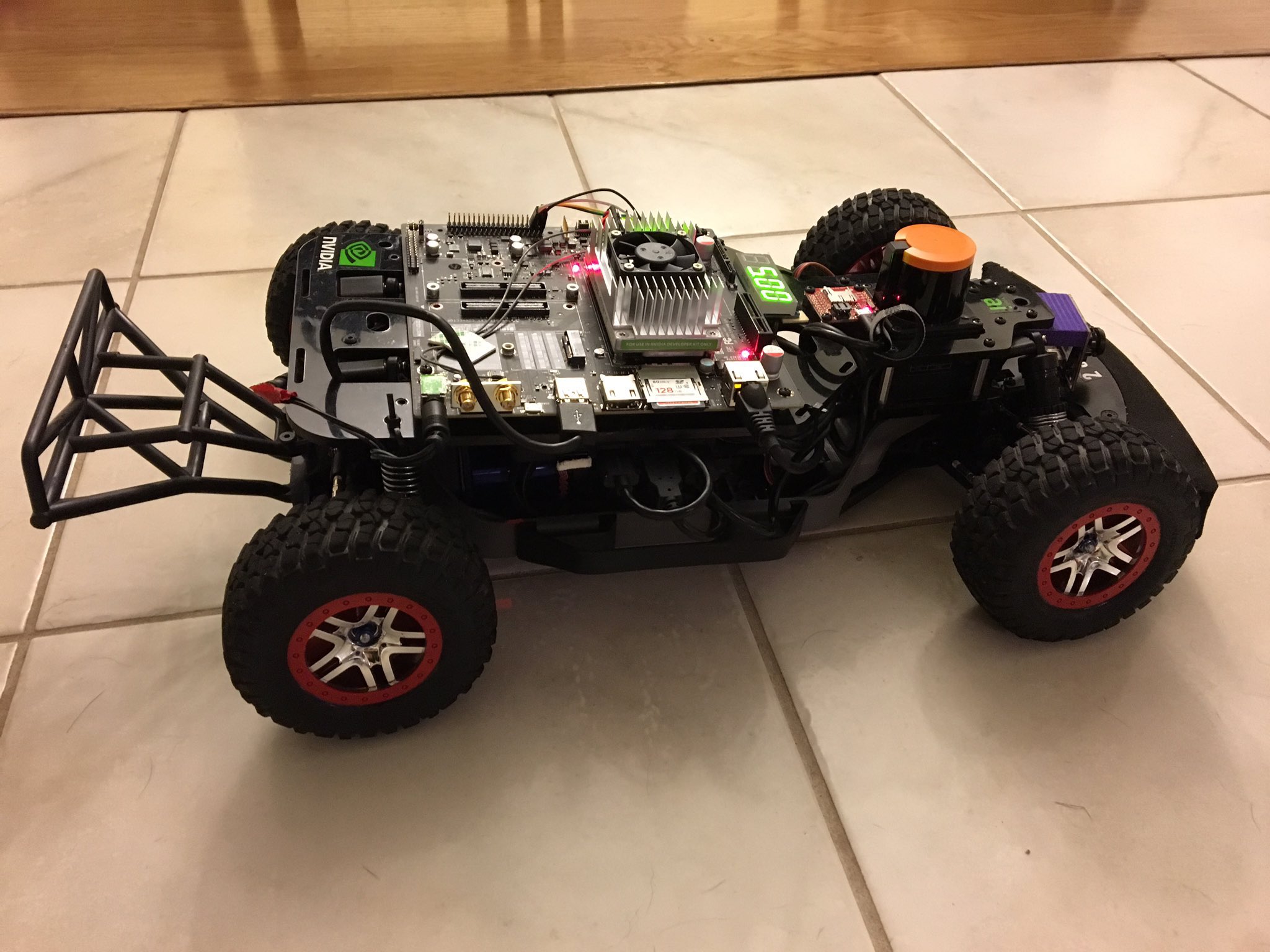 My car participates in races, and to run faster, I need to reduce the weight of the car, every ounce counts. So I am thinking removing the heatsink and fan from the developer kit. I am not sure if it is ok.

During race, the car runs ROS, processes image, lidar data and runs particle filter at a frame rate of 40Hz. I do not use GPU nor the Denver2 cores, so far I feel the CPU is more than enough for my applications. And usually the race last for 20 seconds and then I can shut down my racing program and the TX2 will stay idel or do minor file transfer work.

Nice build!
More effective would be to use a small form factor carrier board such as eg the Auvidea J120 and rather leave heatsink on.
You would gain easily a 100 grams or more plus plenty of space.
Since you are not using the GPUs nor the extra CPU cores another alternative could be to run your application on a small Raspberry Pi 4.

No, my car is fully optimized for TX2 developer kit io ports and shape. I could not use other carrier board. I found there was other metal attached to the TX2 chip set after I detached the heatsink and fan. So I think I should be ok. Also, I found I could remove Wifi antenna metal hooker, the CSI camera board and the screws. All together, I probably can save 100g.

If and only if you have a backup heat sink to test, I would consider drilling holes through the existing heat sink fins in the direction the car travels…perpendicular to the fins.

I’ll tell you a story which will probably seem irrelevant, but actually is related (indirectly) to this. A long time ago when the first aircraft were being built for later WWI and earlier WWII, there were bigger and bigger engines. The cowling around the engines were known to help flight with lower drag, but they also thought perhaps this was restricting flow of air and increasing engine temperature. They experimented with removing the cowling and exposing the engines directly to the air flow, but it didn’t turn out as they thought it would: The engine temperatures actually went up when cowlings were removed. What they discovered was that if air flow is directed across the surface of the engine through the cowling that the smaller air flow with a directed path exceeded the cooling ability of the increased total air flow without the cowling.

How fast is your car moving? Is it moving most of the time? Would you be able to go to a lower power mode when stopped, and only increase clock speeds and performance modes as the car moves faster? Do you have a way to direct air flow (assumes the care moves fast enough to have some sort of flow)? How hard would it be to rotate the TX2 itself 90 degrees so the fins line up with the direction of air flow?

If you had a controlled air flow, then you might be able to remove the existing fan. Even with the fan, increased air flow might mean you can drill holes in the aluminum fins to lighten the weight.

Now also imagine simply moving the fan with intake from the forward direction and exhaust towards the rear. Not exactly propulsion, but it would counteract the air pressure slowing the car while adding a benefit to cooling. A correct intake duct might partially take advantage of that (a tiny tiny advantage with a fan that small, but you said you are interested in even tiny improvements).

I think it is a good idea to drill holes in heat sink, however, I may not need it. The race includes 5-6 rounds of competitions. Usually I run the car for about 20 seconds and wait for a 10-15 minutes for other competitors to run. Then run 20 seconds very intensely, and wait for 15 minutes, and so on. The car could run as fast as 15 mph. When I am waiting, I can shot down my race program, or even the TX2 completely. I do not think I really need to the addition heat sink and the fan since 1) I even do not need to run jetson_clocks.sh 2) the fan was never on.

I will remove the heatsink and fan and test it out.

The car ran ok after I removed the heatsink and fan. Next step, remove Wifi related parts…