It’s been a while since I heard about the wayland support of nvidia drivers.

I know it’s a game changer, and I wonder whether we’ll soon have a beta version of the support in the drivers.

I’m taken aback by everyone’s desire to have Wayland support actually. It has recently hit version 1.5 yet it’s still incomplete and largely unusable.

I would be satisfied if the drivers were window system independent. So linux desktop with nvidia drivers and card wouldn’t be forced into X.org.

Otherwise I’m looking for wayland support because I would like to have a kind of desktop where it’s doesn’t require a huge toolkit to implement a window that can do basic interactions with the remaining desktop (go fullscreen, grab mouse, set the icon, sit in a tray or drag items inside/outside of itself). Also I like the small details such as not tearing when resizing a widget.

NVIDIA has not indeed been rushing. It’s been maybe… two years since I asked this for the first time? I’m happy that they’ve been working on it.

Wayland might be unusable for real use indeed if it’s still missing libsdl. I’m looking at what wayland could become, that’s why I’m asking for support for it. Sure you could call it “yet another open source toy”. But I guess you would have to heavily lack vision to do that.

Well… Pick a distribution with KDE desktop and you can guarantee it will crash and burn every once and in a while. Gnome somewhat works, but it’s also quite odious.

I sort of hope Wayland would solve exactly this problem. Provide an alternative for stupid things that do not work. That’s what freedom is all about after all? It’s not going to cost you less, but it’ll pay off in other ways.

I respect NVIDIA just for the quality of hardware they represent, but I would respect them more if they supported Linux properly, without X.org jailing at their binary drivers.

Why has my comment been deleted is beyond me, ok, let’s just link to it.

I’m taken aback by everyone’s desire to have Wayland support actually. It has recently hit version 1.5 yet it’s still incomplete and largely unusable.

Wow I totally must be doing something wrong then on my old laptop while running Gnome 3.12 on Wayland with the nouveau driver. 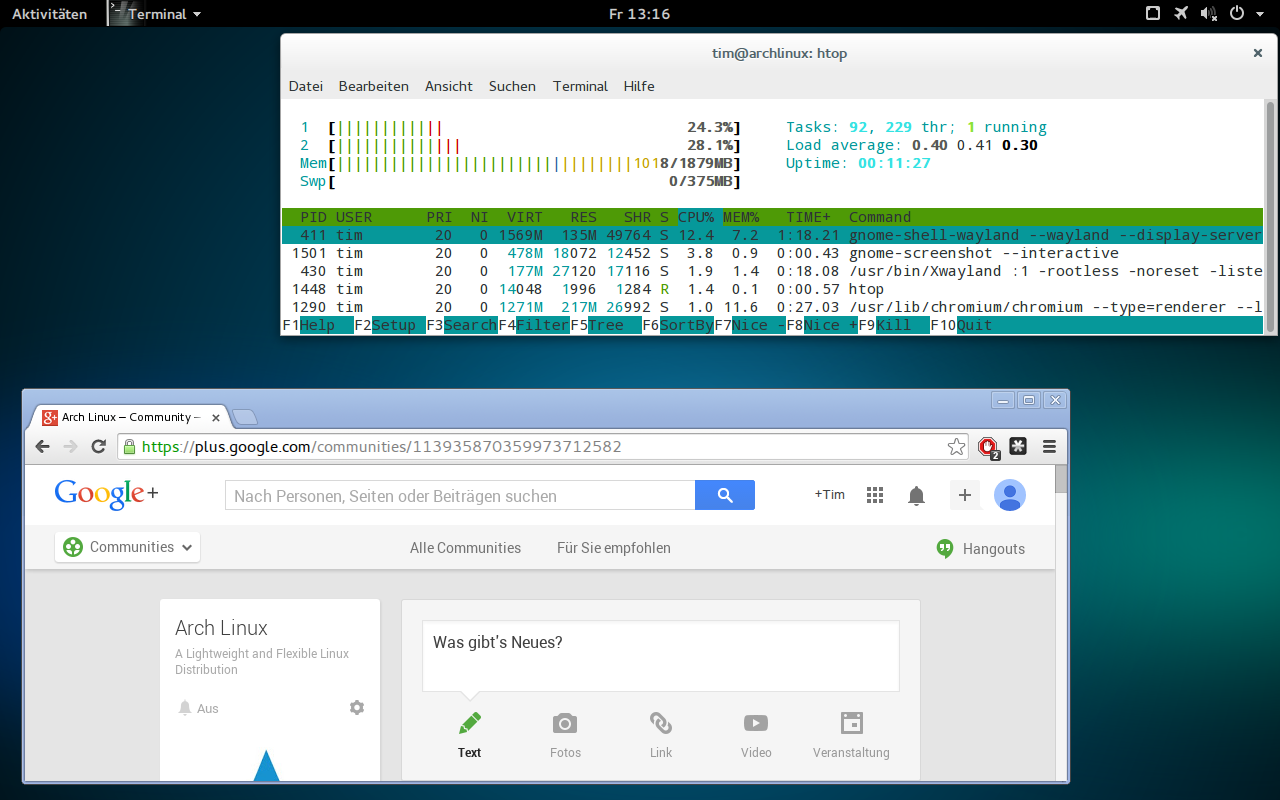 It’s not a secret that NVIDIA is working on getting Xwayland support in their Linux driver. Just read the XOrg mailing list. They also already added a lot of EGL extensions. The biggest hurdle will be to do video acceleration and modesetting without it being tied to X11.

You’d still use toolkits like GTK+ and Qt5 to write applications that run native on a Wayland compositor. SDL2 also has native wayland support since 2.0.2, which has been out for a while now. Don’t know what you mean with “Wayland might be unusable for real use indeed if it’s still missing libsdl.”

You see… it has a conditional. “if it’s still missing libsdl”. See the easy logic there?

And sure, you can still use GTK and QT. But you don’t pressingly them for desktop software anymore. There’s not a hairy ball of tar behind them anymore. This also means for a simpler system even with GTK, because when the abstractions tend to leak a bit, they do not ooze icky things anymore.

I’m taken aback by everyone’s desire to have Wayland support actually. It has recently hit version 1.5 yet it’s…

Wayland is already usable and is used in production (Jolla use it). Nvidia is cleary behind with support. However on the desktop they have some time still, until Gnome and KDE will enable Wayland. But not much time at all. This should happen this year already. Apparently Nvidia are working on Wayland support already. Wayland however is in active development itself, and has major updates with xdg_shell for example. It doesn’t mean it’s not usable though.

Why has my comment been deleted is beyond me, ok, let’s just link to it.

An absolutely unstable OS lacking any stability and clear direction. A total mess of half-assed ideas thrown into the pool called Open Source.

That’s the exact reason why something like Wayland is needed. It allows for creativity, when creating a windowmanager/displayserver, while making the coder stick to a model. It’s freedom and stability (depending on code quality, obviously) in one bundle.

I agree that the OS as a whole needs direction - for the most parts. It’s clear that a lot of the community, works to make it as cross platform, open, and versatile as possible. If all the components that is needed to make up a complete OS with a DE/GUI, stuck to models like Wayland (where it makes sense), then stability and direction should be easier to reach.

Regarding Linux as an OS; the kernel (most versions anyways) is extremely stable. I’ve had a lot of stability issues with different DE’s, but that’s hardly the remainder of the OS’s fault. Mostly it’s been X-crashes, before they started tearing it apart, to prepare it for XWayland.
But I guess that’s what you can expect of 27 year old code, wrapped in an indeterminate amount of compatibility wrappers.

Regarding Linux as an OS; the kernel (most versions anyways) is extremely stable.

With one major caveat - it’s stable when it works. It’s stable when you use Linus approved GCC versions (I’ve personally discovered two bugs where GCC miscompiled the kernel and made it unstable and prone crash):

For the past 20 years I’ve had over 30 pieces of hardware which either:

and twenty more which didn’t work at all.

birdie: And that shows what? Nothing, besides that your hardware wasn’t supported by the kernel. The amount of hardware not supported by other OSes is even higher.

Nah, it just shows that he’s never known how to use linux, or he’s beeen using arch or gentoo when he should be using debian, ubuntu or centos, as a person who doesn’t know how to use linux should.

Let me teach you a trick birdie, I’ve experienced slow desktop environments too, it’s no fun, I got sick of it just like you did. KDE is crap when it comes to performance, and I don’t like gnome so I can’t comment on that but it’s probably got similar performance since they’re the top competitors.

So what you do is use so called lightweight window managers or desktop environments, things like LXDE are perfect, Enlightenment if you don’t mind “randomly stopped working” happening from time to time (enlightenment is beautiful, but it’s been in a very experimental state for a while now)

Worked half the time is definitely a problem happening between the keyboard and the chair. And I reckon its the same deal with crashing kernels.

I’ve had a lot of kernel panics over my time of using linux, but 99% of mine were my own fault. The other 1% were driver faults (which I was usually able to fix by switching around drivers)

But if you use a tried and tested distro like debian, ubuntu or centos then it’s very unlikely for you to run into problems. Don’t use fedora.

There is also a trick that you can use on linux to make it work beyond fast (rather than beyond slow) which is kinda hard to do in windows (especially because of it’s size) and that is loading your system to memory and run your / partition straight off of your RAM, now that is gonna be fast like you’ve never seen before, your only speed limitation will be your processor in this scenario.

Tinycore and damn small linux are popular choices, but there are more.

So your arguments are all invalid. Same about Wayland being unusable, just linking to someone saying it’s mostly unusable without actually reading that these are things most users can live without (and I also don’t see a date on that document)

Either way, Wayland is mostly usable already. But there is a lack of programs supporting native wayland rather than native X11. If XWayland would manage to be on par with x11 in performance, then there’d be no reason not to use wayland anymore unless xorg has something you specifically need that wayland doesn’t have.

I’m not saying that you’re wrong about Linux being messy and not completely desktop ready, because the average user can’t work around all it’s issues, but the thing is that these issues can be worked around, and wayland is one of the major steps forward in this whole mess. Distributions are just bundles of stuff trying to work around all the quirks of linux first before they’re creative designs second (if at all).

We have problems, sure, but they can and will be fixed. It can’t happen too soon, and it hasn’t happened because of all the hardheads in the linux community that thing the old way is the best way.

Either way, Nvidia seem to be falling behind AMD on wayland support, AMD’s official drivers are going to be supporting wayland in the next kernel release with their open source driver stack strategy.

Nah, it just shows that he’s never known how to use linux, or he’s beeen using arch or gentoo when he should be using debian, ubuntu or centos, as a person who doesn’t know how to use linux should.

I am sorry but somebody who’s able to find and report bugs in a compiler is already far from your average “user.” It doesn’t mean I assume he’s right, but I think your argumentation is really poor.

But if you use a tried and tested distro like debian, ubuntu or centos then it’s very unlikely for you to run into problems. Don’t use fedora.

Well I never had more problems than when I was using Ubuntu, and a simple switch to Fedora solved them all. Again, in itself it doesn’t mean very much, but I think you should really back your thought with some facts other than your hostile reaction.
Myself I already encountered many regressions in Linux kernel as time went by (they won’t happen with an LTS kernel, indeed)

So your arguments are all invalid.

So are yours. I mean, there obviously are known bugs and incompatibilities with several versions of GCC, all of which have been acknowledged by Linus Torvalds, so what’s the deal? And also his remarks were directed only towards the kernel, he didn’t write a word about the Linux desktop.

We have problems, sure, but they can and will be fixed. It can’t happen too soon, and it hasn’t happened because of all the hardheads in the linux community that thing the old way is the best way.

On this I totally agree. We have amongst our ranks a real bunch of freaking retrograde maniacs who wish they spent their whole life using GNOME 1.x, sysvinit and X11. In that sense, GNOME devs were right to ignore the flamewar and keep going with their project. Personally I’m really happy with GNOME 3.16 and it surpasses my every expectations as far as desktop environments are concerned. Again, I may not have the same taste as many others, but even if you don’t like their approach, at least they didn’t come up with yet another dual panel, hide’n show desktop.