There is a bug in the Jetson Nano 2gb 4.6.1 image - unless a system has already loaded 4.5.x then it hangs on install and fails. It works fine for upgrades, but not for new install on new 2GB Nano.

Its too big, i need it on two thin strips with connecting wires. Think inside windows, picture frames, door ways.
Can you reconfigure the design, remove the bulky connections. Low power, big display.

@suhash Are the checksums posted anywhere? I’d like to verify my downloaded image before flashing it to the MicroSD card.

@wyphan you can find the checksum in the Jetson Download center:
https://developer.nvidia.com/embedded/downloads#?search=sd%20card

@suhash Ah, I missed it on the first try, since the checksum isn’t listed on the main download link: 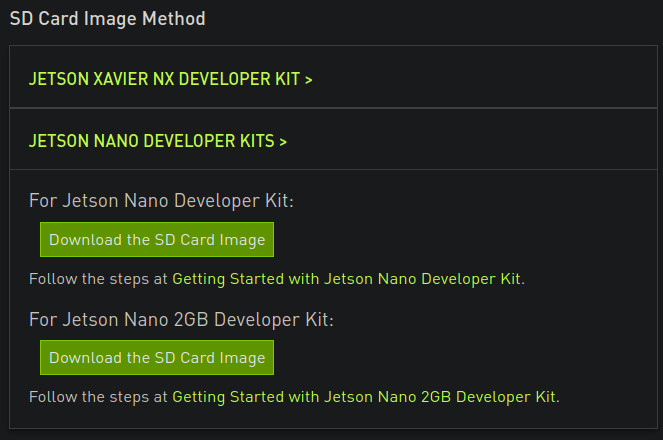 Instead, it’s on the individual list of downloads below:

Perhaps it might be a good idea to put the checksum on both places.

Hi I see the latest the latest 34.1 available. Is it available for Nvidia Nano.
https://developer.nvidia.com/embedded/jetson-linux-r341

In the Link i do not see anything mentioned on nvidia Nano support in 34.1 Preview release, could you please clarify if it will be available as part of 34.1 general release

The older architecture Jetsons are only being maintained. Major releases cover only the actively developed platforms, meaning Xavier or newer. The TX2 and older are actually quite old.

well that’s bad news for several users.
For many Bluetooth chips require a recent kernel this problem happen on x86/x86-64 kernel too

For example many detected as “Cambridge” CSR Dongle 0a12:0001 ID 0a12:0001 Cambridge Silicon Radio, Ltd Bluetooth Dongle (HCI mode)
It does not load a compatible module for these devices with old kernel.

And other issues is only ubuntu distro that officially supports Qt6 without compiling from source code (which takes forever if you want to compile the entire framework) is Ubuntu 22.04 minimal .

Ubuntu 20.04 Support in the actual stage no longer receives new stable versions of libraries required for current development needed wait time and make install compile from source and wait time for development compared with 21.04/21.10/22.04 is a pain.

A rolling release and mainline support would win big for mass development buyers same as how work on PC x86-64 SteamOS system or other boards i.e RPI4/odroid with rolling release options distro systems

In that sense I am disappointed by the direction that Nvidia is taking in this regard.

To say that a HW released in 2019 is old, I do not agree
since there is much lower hardware than the nvidia jetson nano and it continues to be updated in current kernels.

The actual SoC chip has more than one board layout, but the chip itself is what is old. The silicon is what outdates it, not the new format of packaging.

Thanks for replying sorry for late reply I just saw it now, Yes, but I’m talking about the nvidia jetson nano launched in 2019 very few years of support in conditions.

Other issues are present some issues is related the mesa/mainline

I might’ve been OK just using NVIDIA’s closed source kernel and drivers but they didn’t even support the Nano for a full 2 ​​years before announcing.

If you compared this with the support in the long support RPi/ODROID and Others SBC Powervr boards now have Open source drivers with mainline support showing such a lack of respect this level . While this level of support may be accepted by regular smartphone users,
Linux users and developers who gave you a chance with the Jetson platform have been losing and fraid now and most won’t make the same mistake twice.

Other problems that if we talk about Ubuntu 20.04 that are not going to be updated and you need Ubuntu 22.04 for many things indicated below unless you compile it yourself or will needed specific ppa for it (Not always exists for arm64)

Qt5.15 (preferably qt6 switch to qt6 is minimal for some frameworks apps) and updated SDL2, latest fixes several bugs
minimal compilers with CXX17/CXX20 support
This is GCC11+ (preferred GCC12 due to bugs in GCC11 ubuntu 20.04) or Clang12+(preferably clang13/14)

The architecture of the Nano is from around the year 2014. The form factor (the platform) of the Nano is indeed newer, but this just extended the maintenance life of that chip. I can see how finding a new platform would make it seem that new features would be developed, but prior to the new form factor coming out it was already announced that there would be continued supply of the chip and maintenance, but no new development. This would be difficult for anyone just purchasing a Nano to find out about, but this is why Ubuntu 20.04 won’t be supported.

Mesa drivers have never worked well on any NVIDIA GPU. It is also impossible to use GPU acceleration without the NVIDIA driver. The driver which comes with the Nano’s flash software is the only one which offers quality. I’m not sure why anyone would want to use a Nano with Mesa since it becomes just a CPU powered framebuffer.

To get what you want you need to migrate to the Xavier or Orin. Xavier is itself already a couple of years old, but will get new feature development for awhile (not sure how long, there are some web URLs out there with exact dates).

This probably is not yet relevant, but I see hope for improved “recent release” software becoming possible due to the change to booting with UEFI. The Orin with L4T R34.x is the beginning of this, and I expect Xavier will get this as well. Migration to a new major release of Linux kernel is part of the difficulty of going to a new major release of any distribution, but in my opinion, it has been boot setup which has made this most difficult. UEFI will perhaps make newer major distribution releases easier. Certainly, if anyone wants to build their own customization, UEFI will vastly improve the odds of succeeding.

Don’t know about the Vulkan part.

I’m not sure why anyone would want to use a Nano with Mesa since it becomes just a CPU powered framebuffer.

Note that the Tegra X1 is supported by Nouveau with full reclocking, so nowhere near as bad as other chips.

This probably is not yet relevant, but I see hope for improved “recent release” software becoming possible due to the change to booting with UEFI.

NVIDIA announced that there will be a preview for that to support more distributions later this year.

Also note that Jetson Nano got u-boot w/ the UEFI module enabled at the end of its life on 32.6.1.

Installing Fedora on the NVIDIA Jetson nano – nullr0ute's blog see this for Fedora for example.

I think that it could become quite polished and brought up to date with some work, but am going to see what NVIDIA will do with Xavier and Orin and then replicate that for earlier silicon.

Is there an V4L2 library that does not depend on Argus? If so, what version is it?

Thanks for the update. Where can I find the VPI 1.2 document?

The VPI’s document link on JetPack release notes is not VPI 1.2 but VPI 2.1.

NVIDIA JetPack SDK is the most comprehensive solution for building end-to-end accelerated AI applications. All Jetson modules and developer kits are supported by JetPack SDK.

Thanks for your reply.
I know that VPI 2.x for JetPack 5 has been released, but my understanding is that there is no new JetPack release for Jetson Nano.
I think we need VPI 1.2 documentation for development with Jetson Nano. Are VPI1.2 and VPI2.1 fully compatible?

VPI 2.1 is supported on JetPack 5 only. We can not use it with JetPack 4 on Jetson Nano.

Thanks! That link is exactly the information I wanted to know.