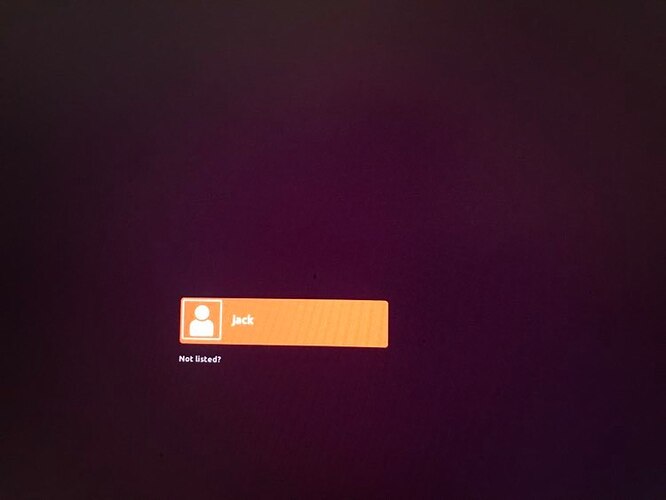 I made some progress and can get to this screen (before it was the EULA screen).

The change i made was flashing from the terminal after creating a user instead of sdkmanager.

If only there is a way to ssh into it to log in. Is this not possible through ethernet? I thought it was but I am just too noob to figure it out.

Is only micro usb dead or every usb port are dead?

only USB A is dead.

I think I have a very similar problem to this person, which I read a while ago but didn’t understand but now it makes more sense.

Do I need a crossover cable?

Been looking at some tutorials online, but they haven’t been very helpful or worked. All I’m trying to do is access the Jetson from a laptop directly through an ethernet cable. But so far the farthest I can get is the ability to ping the Jetson IP, but then the SSH connection is refused. If I connect the Jetson to a network, then I can SSH into it fine; it’s just that the eventual use case will be in the field where it will not have an existing internet connection we can use to connect to it, s…

Meant to link entire thread, not just that one reply ^

FYI, if address 192.168.55.1 can be pinged from the host PC, and if that address is the one the Jetson has, then this message indicates the ssh server on the Jetson is probably not running:

On the Jetson side, if your login name is “user”, what happens if you try to log in from a console and then locally over ssh?
ssh user@localhost
…does it say connection refused?

I actually may have modified it in my attempt to solve the issue/assign IP addresses. I was attempting to follow a guide (will look it up in a sec) which said to modify the IPv4 addresses and assign a host and a target machine with the respective IP addresses.

All that to say, I would not trust exactly what ifconfig shows… It definitely is the host PC side. I cannot login to the the Jetson OS because of the broken USB mode. I can accept it’s wrong as I probably stuffed it up.

I can try revert the changes and send the ifconfig again.

Thanks for your help!

In response to the second part, I believe it says connection refused but most likely because of the incorrect assignment of IP addresses.

Let me resolve that ASAP.

JetPack 4.2 Flashing Issues and how to resolve Jetson TX2

I’ve also been having problems installing Jetpack 4.2 on the TX2. I had two major problems that I’ve finally been able to resolve: Flashing Post flash install of SDK components. Flashing Required me to install python and xterm first. sudo apt-get install python sudo apt-get install xterm Flashing worked after I figured out how to get the TX2 into recovery mode. As stated elsewhere, use lsusb to check that there’s an NVIDIA device connect to the host before trying to flash. It only app…

I was following this guide and trying to do step 2.b

I researched and added some profiles in “Network Settings”. I have now deleted those profiles

This command shows an interesting result.

I guess my next step is to buy a crossover cable to connect the two PCs together in hopes that it will detect the target board.

And if that fails, test UART connection. Will keep you posted/ask for any other questions if I think of any

There are something that I don’t really understand. Let me explain how this works and then introduce my questions here.

This “nv-14t-usb-device-mode.service” is a script to initiate the usb device port as a ethernet interface. That is why you can ping 192.168.55.1 without any ethernet cable connected. This “192.168.55.1” is not from the etherent but from the micro usb port. Thus, I thought it was dead micro usb port in the beginning.

And here comes the part that I cannot understand

If micro USB is working, then I have no idea why nv-14t-usb-device-mode.service fails to start. Without this script, usb device port would not become an interface that you can ssh to.
But actually I don’t care which interface you are using. What we need to do now is find out a interface that we can use to start a console on device and dump the log. With the log, I can tell why usb port is dead.

Those interfaces come to my mind are HDMI, Ethernet, UART.

Another weird part is if this is TX2 board, then actually the micro usb port is able to run as host mode too. It means you can connect a keyboard to micro usb port and it should be working along with HDMI monitor so that you can dump the log…
But what I am taling is devkit case, so I am not sure if Leopard also makes their micro usb port with otg function.

This “nv-14t-usb-device-mode.service” is a script to initiate the usb device port as a ethernet interface. That is why you can ping 192.168.55.1 without any ethernet cable connected. This “192.168.55.1” is not from the etherent but from the micro usb port. Thus, I thought it was dead micro usb port in the beginning.

Hi there, I’m sorry it’s been quite unclear. I hope this helps you a bit more to summarise everything that’s happened:

I mean if Leopard uses the same design same nv devkit, then their micro usb port should have otg function too.

In that case, if you can use some usb A to micro USB adapter, you can use keyboard on micro usb port.

Them, with HDMI and keyboard, you can login and dump log.

So it turns out that Leopard Imaging use an entirely different OS image (based on Jetpack 4.2.2) with a dtb file that once installed enables the USB mode.

I am glad I reached out to them as without that file I don’t think the USB would’ve worked.

Thanks for all your help with this anyway, I’ve learnt a lot about the board itself and how the machines communicate through ssh and micro USB that I didn’t know before.

This thread can be closed :)

Hi, I have the same trouble, Can you provide an OS and dtb files ? I want to have a try, thanks

Are you using the Leapard carrier board? That’s what this thread was for. If you are using that, then they (the manufacturer of the board) must provide that content. If you are using the development kit, then you need to start a new thread. FYI, the list of available JetPack/SDKM versions (which is run on a Linux PC for flashing a Jetson) is here:
https://developer.nvidia.com/embedded/jetpack-archive