MHGH28-XTC not working; I’ve tried installing it in Windows 7 amd Server 2008r2. In both instances I get a device error 10 in device manager. Further attempts to update the firmware have failed giving me an error “corrupted device ID 0xffffffff” Can anyone assist or did I just buy bricked NICs? I will be attempting a Server 2012 install tonight.

Any Assistance is appreciated.

so make sure opensm is running prior to trying to update the firmware?

These adapters give all kinds of worrying status stuff if they don’t have a link detected (ie cables plugged in). They’re different from the general run-of-the-mill standard GigE cards in that way. So, a fair amount of your worry and frustration has probably come from that.

But, don’t stress, you’re on the right track and not far from having things work.

If you have any troubles, you’re completely ok to ask for assistance.

Hope this helps, the images are not in order but there is a screenshot of the drivers failing to upgrade the card

then the same thing with the command prompt. Three cards are all like this. 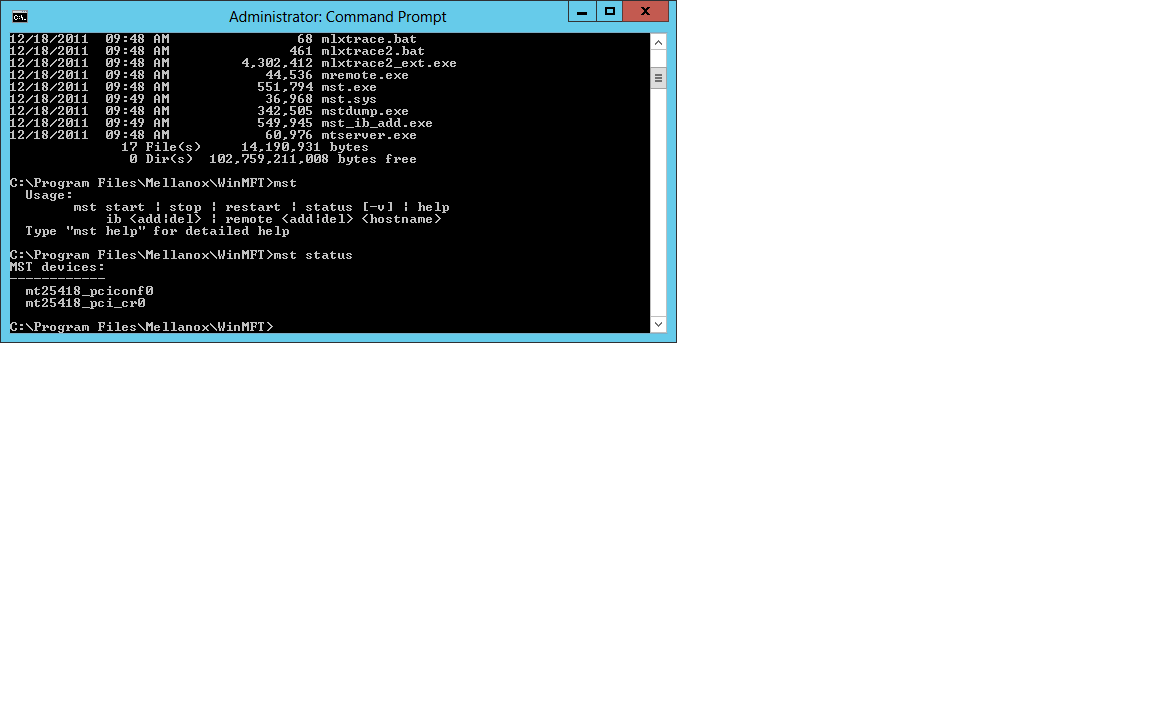 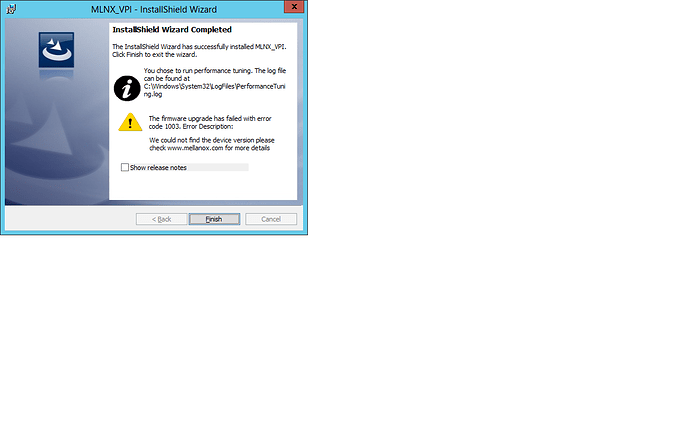 Did you get these working?

I bought several of these cards too (exact same eBay auction ID from atlanticdeals), and they’re working fine in RHEL 6.4 and CentOS 6.4. So, there’s definitely no hardware problem with the cards themselves.

That being said, it might be worth trying a different PCIe slot on your motherboard when flashing, just in case the slot you’re using at the moment in in x4 mode or something instead of x8. I remember having issues a few years ago with some PCIe slots with some older generation Mellanox cards. (took a lot of hair pulling to sort that out :>)

Also… are your Linux skills in decent shape (yet)? Just asking because a lot of the software tools for Infiniband seem more Linux oriented than Windows oriented. (my impression anyway)

With my experience with Windows and ConnectX cards i learned that having the latest FW revision is a must.

I am not sure if your card actually works and whether you tried updating the firmware of the card but there is no point in continuing unless the card runs one of those later versions.

This page would have the FW you need Firmware for ConnectX® . you will need to look at the sticker on the card for the right revision to determine which of the 3 available options is the right for you.

Then, you need the MFT package that has the burning utility. should be right here Mellanox Firmware Tools (MFT)

It doesn’t sound like the issue has to do with the version of your windows. definitely sound like an HCA issue - either bad or runs an old FW.

I hope it helps…

When you type mst status what does it give you?

I tried upgrading the firmware on the card. Ill try it again tonight on a new machine but last time I tried I was getting an error

well, the PCB board itself is certainly multi-layered. i can’t really say if the damage you are pointing on would cause any malfunction.

trying to recap on things here:

I tried upgrading the firmware on the card. Ill try it again tonight on a new machine but last time I tried I was getting an error

mblanke Infrastructure & Networking - NVIDIA Developer Forums I have moved your post into the correct thread so we can better track.

Yeah, my cards had the same firmware version when they arrived too.

It’s good you got the firmware updated, sounds like you’re progressing.

Are the cards being detected ok now, and they’re now able to communicate between hosts?

On another tangent, which cables did you end up getting? I went with the el-cheapo option and got the cables here (arrived today), which are working well:

If you do want to start trying out Linux stuff with Infiniband, as yairi mentioned it would be a much better idea for you to go with CentOS instead of Ubuntu (for now anyway). Someone with really good Ubuntu skills could be ok, but when starting out… not so much. People here can help with “exactly what to type” instructions for CentOS (not so much for Ubuntu generally).

For these cards, the drivers installed by the default “Infiniband Support” yum group in CentOS 6.3 worked and the test boxes have since been upgraded to CentOS 6.4. (still all ok)

I haven’t done any in depth testing yet (only received cables today), so you could be right.

mst status should provide you with the list of devices available for accessing the card should you need to burn FW onto it. in your case you don’t need that anymore.

once you got the driver loading on your machine, you should see it in device manager. also you should see a couple of IPoIB network interfaces (one for each port you have for the card). configure those with IP addresses just like you would configure any Eth interface.

Don’t forget to run opensm daemon on one of the servers. without that nothing will work.

I spoke with Mellanox and confirmed that there is no SRP in the 4.2 driver. The Mellanox guys have been very responsive and helpful.

My take is that 4.x drivers primarily appear to be Windows 2012 Server to Windows 2012 Server. A collaboration between Mellanox and Microsoft to get infiniband support into the new OS. The big push of course was SMB 3.0. As far as I can tell they have done a good job.

However if you want to connect a Server 2012 box to anything besides another Windows box then the drivers are lacking supported protocols.

My sincerest hopes are that the next version of the drivers will include SRP and allow use of the full bandwidth and RDMA features to nix based boxes.

Only one port is connected to a cable so this looks about right. I am also trying for SRP (iSER etc) not IBoIP so rate of 20 also looks good.

Just need to see if my Solaris box and see the Windows box now.

Are these boards multi layered? The cards I bought have some damage to them 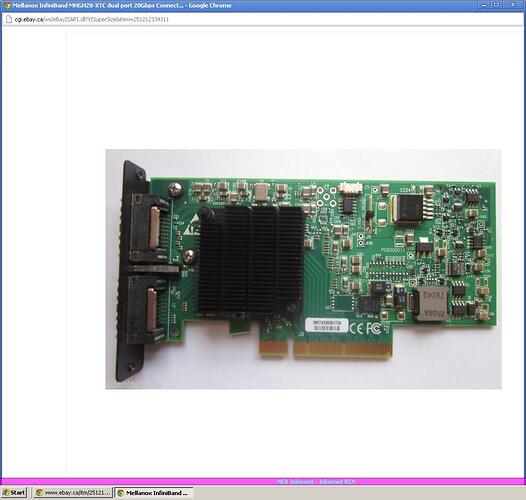 Would this cause any issues?

Ha thanks, a little out of my price range for home use.

see if you can get your hands on a newer Infiniband card model (ConnectX2 or 3) with matching set of cables.

where image_name.bin is the name of the FW image you are applying to the card.

important note: i wrote in the above post that the card you have had 3 different HW revision. pay attention to which revision you have and choose the correct FW file.

Thanks I’ll try what you mentioned this morning. with the other device mt25418_pciconf0 though I have a feeling I’ll be returning this to the seller (with difficulty)