Had my Ubuntu MATE system (22.04) was using Nvidia 510 drivers. At random looking at nvidia-smi I noticed the power draw elevated at idle. About 75 Watts. Did some research and it was a known issue and was fixed in the 515 driver.

Updated to 515, cool power draw normalized. BUT…my monitor no longer could be set to 144hz. If I tried, it would go standby. Wouldn’t revive until reboot. Settings would not stick.

Tried via the additional drivers gui and straight from NVIDIA. Figured I would need to go to most recent release for the newer drivers, gave that a try…nada.

Tried addressing settings directly in xorg.conf, tricks like set in nvidia settings and then the ubuntu display app and vice versa…nothing. Straight to standby.

Turned off and on the monitor a few times. Unplugged it, everything.

Anyone have an idea on what to do next. All symptoms point to the drivers.

before I forget the system: 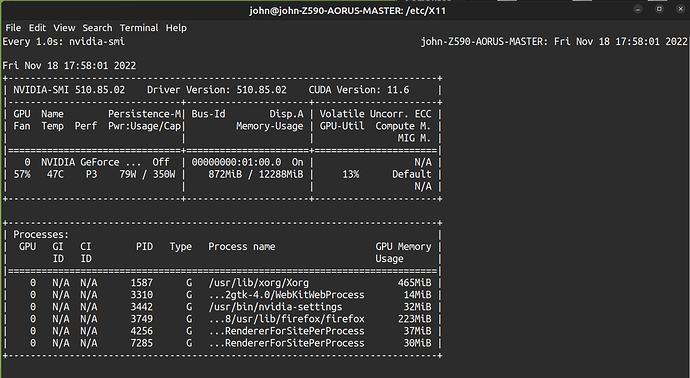 Did you set the refreh rate to 144Hz before taking the logs?

I suppose with 520 reportedly fixing the power draw issue I guess to conclude and make my ask for help more concise is to find a way to apply 144hz and not have the monitor go into standby. This happens when writing in 144 in xorg.conf (I did not do prior to providing this log)

Sincere apologies for the confusion.

Hi @generix, sorry to be a bother on a trivial matter. Can you point me in the right direction. Doesn’t need to be the full answer but a thread or error to look into.

Thank you for your time. Much appreciated.

What kind of DE are you using?

Thank you generix. I am using:

I don’t understand why you’re “writing in 144 in xorg.conf”. This shouldn’t be done this way. What happens when you set the refresh rate in Mate’s display settings?
https://www.technipages.com/linux-mint-configure-output-resolution
Please create a new nvidia-bug-report.log afterwards.

In a fresh install of Ubuntu Mate 22.10 and Driver 520 the option for 144hz disappears. That was a ham fisted way of trying to remediate. 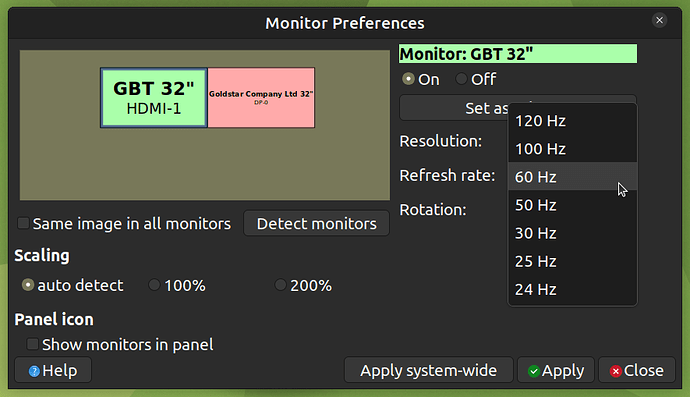 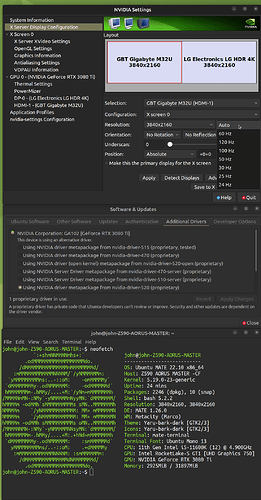 Sorry for the information overload. This should do it.

though I don’t think this will help. The mode will show up again but using it will most likely just give you a black screen.

Not so much luck - mode did not return.

I will keep tabs on the below tread to see if there is a workaround for the idle power usage for driver 510 if we have exhausted all possible fixes for Driver 520.

I’m sure I’m one of the first consumers actually running the RTX 3090 on Linux, so I understand that all the issues may not have been caught. And we definitely have one here. Idle power usage is over 100W at all times. That’s insanity. I know this is a power-hungry GPU, that’s all well and good, but not at idle when the GPU core clock is at 240MHz. At least it definitely shouldn’t be. Yet as sure as I’m standing here, I have a constant power draw of 110-115W just on the desktop doing nothing …